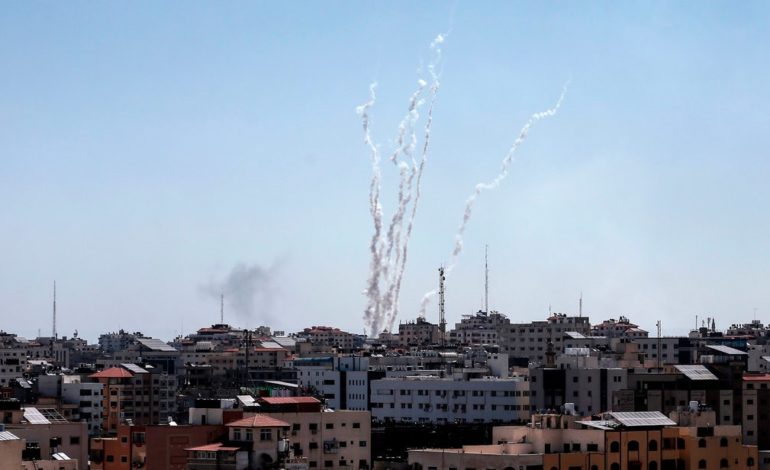 Rockets were launched from Gaza towards Israel on Saturday -Photo from Getty Images, Mahmud Hams/Agence France-Presse

GAZA — An Egyptian-mediated ceasefire agreement was reached with Israel on Monday to end a weekend of violence in the Gaza Strip and Israel, a report from Reuters said.

“The ceasefire understanding will begin Monday 04:30 (01:30 GMT)” a Palestinian official familiar with the agreement said to the news agency.

The fighting was said to be the worst in the region since 2014 according to a report from The Independent.

Four people were killed in Israel after nearly 700 rockets were fired from the occupied and beleaguered Gaza Strip, while 25 Palestinians were killed in retaliatory airstrikes according to mainstream news reports.

Over 350 targets were struck by Israeli forces in Gaza and nine of those Palestinians killed were said to be militants.

Israeli prime minister Benjamin Netanyahu said that “the campaign is not over…We are prepared to continue,” stoking concerns of further military conflict.

UN Secretary-General António Guterres meanwhile called for “maximum restraint” and condemned “in the strongest terms the launching of rockets from Gaza into Israel, particularly the targeting of civilian population centers.”

The fighting broke out as leaders from Hamas and the smaller armed faction Islamic Jihad were in Cairo for talks with Egyptian mediators aimed to prevent a fraying ceasefire from collapsing altogether.

Egypt succeeded in mediating an agreement between Israel and Hamas following an exchange of rockets and airstrikes in March.

Though it was not publicly acknowledged by Israel, the agreement included measures aimed at loosening restrictions imposed on Gaza’s struggling population of two million people.

Both Hamas and Islamic Jihad expressed frustration over what they consider the slow pace of Israeli concessions meant to ease an economic crisis in Gaza, part of the Egyptian-brokered understanding that is meant to stabilize the on and off ceasefire.

The rocket barrage on Saturday came less than a day after two militants from Hamas’ armed wing were killed in an Israeli strike on Hamas posts in Gaza.

Israel is preparing to mark Independence Day next week, and analysts say Israel’s Prime Minister Benjamin Netanyahu would prefer those events to occur in a state of calm rather than one with arising conflict.

Gaza residents are also mourning during yet another round of brutal violence and deaths that have occurred near the beginning of the holy month of Ramadan, an all-too-familiar scene in recent years.

The world is changing: China launches campaign for superpower status