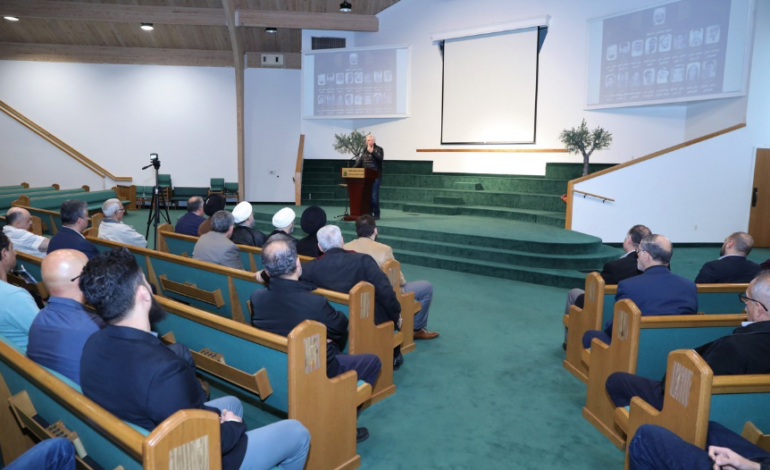 DEARBORN HEIGHTS — On Saturday, May 4, public officials, religious and community leaders came together in the Islamic Institute of America (IIA) to commemorate the innocent people who were brutally beheaded by the Saudi regime.

Saudi Arabia beheaded 37 of its citizens on April 23, in the largest mass execution the country has carried out since 2016.

The Saudi government said that Shi’a religious leader Sheikh Mohammed al-Attiyah was among those executed on terrorism-related charges. Amnesty International said that the majority of those convicted were given “sham trials” that relied on confessions extracted through torture.

Community and religious officials at the gathering included Sayed Hassan Qazwini, founder and leader of the IIA, Osama Siblani, publisher of The Arab American News, Zouhair Alawieh and Walid Fidama.

“What happened in Saudi Arabia is due to ultimate fear,” Siblani said about the Saudi regime. “Beheading in the fashion, number and publicity they did, they were trying to send a message to the world.”

He described the actions as animalistic and said the Saudi regime seeks to keep itself in power by punishing those who disobey.

Siblani further emphasized that the people of Saudi Arabia are victims of their own circumstances and did not denounce them while speaking of the regime itself.

“They accused them of terror, yet they (the Saudis in power) practiced the ultimate terror against humanity,” he said. “They did it in public squares and announced it to the world in order to tell them that they are going to stay in the monarchy as a kingdom as long as they could.”

“Stand up, rise and fight back,” Siblani said.

Qazwini commemorated the lives lost in Saudi Arabia as he spoke of the Prophet Mohammed’s son-in-law and grandson, Imam Ali Ibn Abi Talib and Imam Hussain.

“Islam is not only about the pilgrimage to Mecca, praying or fasting, for it is also about equality,” he said.

He emphasized the moral principle of defending those who are oppressed, as it is as important as praying and fasting in Islam. He addressed the rise against oppression as humility to teach the people and mankind that life has more meaning when kindness and humanity are embedded to it.