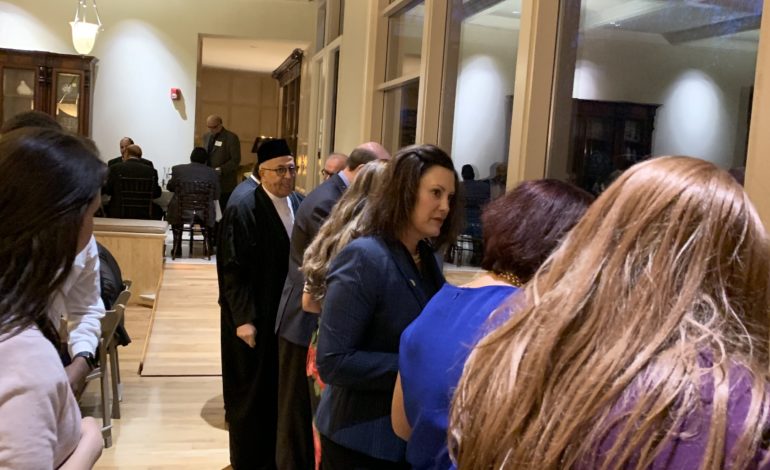 Michigan Governor Gretchen Whitmer held an iftar at her residence in the governor mansion for Muslim leaders on Thursday, May 9. -Photo by The Arab American News

Ramadan began Sunday in Metro Detroit, where mosques are becoming a familiar sight alongside churches and the traditions of Muslim American residents are on full display.

Governor Whitmer was among local and national leaders to extend Ramadan greetings. She did so in a Twitter post.

“#RamadanMubarak to all who are participating,” she wrote. “May your time of fasting and prayer be peaceful and empowering.”

“Best wishes for a meaningful observance of Ramadan to Muslims in America and around the world,” she wrote. “May this be a time of peaceful reflection, prayer and spiritual renewal for all.

“The holy month of Ramadan is a reminder that the principles of generosity and hospitality are important…May we all join together in the tradition of breaking bread around a table for lasting friendship and appreciation of diversity during a time when our differences are often discussed more than our similarities.”

Nationally, President Trump released a statement through the Whitehouse.gov website.

Trump, who has been criticized for divisive and inflammatory rhetoric and statements towards Muslims and Muslim Americans, released the following greeting:

“I send my warmest greetings to all Muslims observing the holy month of Ramadan,” his statement read.

“Throughout this month, we all have an opportunity to reflect on the blessings we have been given and to work toward greater fellowship with one another. Together, in the spirit of Ramadan, we can achieve a more harmonious and respectful society. Melania joins me in sending our best wishes to Muslims in the United States and around the world for a blessed month of celebration.”

This year’s holy month comes at a time of heightened awareness and security for Muslims around the world in the wake of March’s Christchurch, New Zealand terrorist attacks on two mosques.

With Ramadan underway, national media outlets have focused on the pressing security question.

“It just became more critical for us to take more organized steps to ensure that something like (the Christchurch attacks) never happens here, or if God forbid it does come to happen, to minimize (the outcome),” said security planner Rami Aboumahadi of the Islamic Center of Boca Raton, Florida in a Huffington Post article.

The Center hires armed security guards to patrol the premises.

In Austin, Texas, the North Austin Muslim Community Center has been targeted four times in the past several months, including an attempted arson, prompting management to spend thousands of dollars on security this year alone.

Locally, in Hamtramck, which is home to seven mosques within a radius of a little over two miles, the sights and sounds of the holy month were omnipresent as police patrols kept watch.

“It’s a very diverse town; you can see the impact of Ramadan on the streets,” said Saad Almasmari, a member of the United States’ first ever Muslim-majority city council.

Almasmari said that the city was in the process of deciding whether or not an official city iftar (a traditional nightly dinner for breaking each day’s fast) would be held.

“Everything is going smoothly in Hamtramck,” Almasmari said, commending police for taking care of residents participating in activities in observance of the holy month.

Meanwhile, local media outlets, including the Detroit Free Press and Detroit News, published articles on the holy month. The Free Press shared an article titled “What you need to know about Ramadan 2019”, while the News focused more on locals.

The topic of food was prominently featured in the News’ article, in this case the iconic Shatila Bakery where Muslims and non-Muslims alike gather for suhoor treats and sweets. Suhoor is a term for a pre-fasting, late night meal eaten by Muslims, often among friends and family.

“We have a lot of people come out and sit on the patio area, big groups of families,” Tanya Shatila, daughter of the late founder, Riad Shatila, told the News. “It’s a very family-orientated holiday.

“Especially now with the warmer weather, too, people like to go out after sitting at home during the winter time. I think the weather plays a big aspect in Ramadan.”

The News also featured Mirvat Kadouh, the co-chair of the Ladies of the Islamic Center of America, in a story. She shared her thoughts on the holy month, saying a “blessed” feeling is in the air, once the body adjusts to the challenges of fasting.

“We try to do a lot of soul searching to improve our spirit,” Kadouh said. “The whole purpose of Ramadan is to have self-control and to sense how the poor live…You just hope that you’ve done as much as you can to be very charitable, to be kind to people, to have patience.”

Several local organizations, including the Bint Jebail Cultural Center in Dearborn and the Palestine Children’s Relief Fund, were preparing to hold their own iftars, on Friday night and on May 18, respectively. The American Muslim Political Action Committee announced its iftar for Sunday, May 19, which is free to all and aimed at helping those in need in the spirit of Ramadan.

Wayne County Executive Warren Evans’ iftar will be held on May 20, with the location given upon RSVP. Those interested may register by sending an email to Zhussein@WayneCounty.com or by calling 313-721-0034.

Dingell’s iftar for the community is scheduled for Monday, May 13 at 8 p.m. at Byblos Banquets in Dearborn.

In her statement, Dingell reminded the local community about the importance of staying united during challenging times and maintaining the spirit of the holy month.

“This is a time of solidarity and joy,” she wrote. “We cannot forget the hate and division too often directed at our Muslim brothers and sisters. United we stand, divided we fall.”