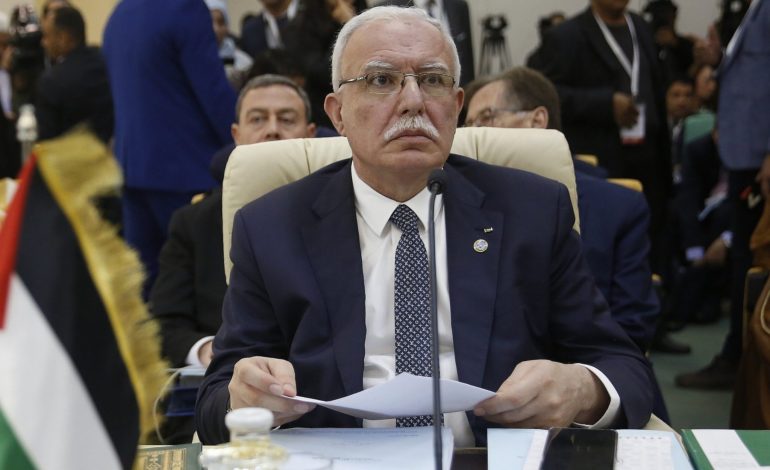 UNITED NATIONS — The United States seems to be crafting a plan for a Palestinian surrender to Israel instead of a peace deal, Palestinian Foreign Minister Riyad al-Maliki told a meeting at the United Nations attended by U.S. Middle East peace negotiator Jason Greenblatt.

Greenblatt and senior White House adviser Jared Kushner have spent two years developing a peace proposal that they hope will provide a framework for renewed talks between the Israelis and Palestinians. The plan is expected to be unveiled in June.

“We cannot afford not to engage with any peace efforts, but the U.S. administration efforts cannot be characterized, nor can qualify, as peace efforts, unfortunately,” al-Maliki told the informal meeting of members of the U.N. Security Council on Israeli settlements in the occupied Palestinian territory.

“All indicates thus far that this is not a peace plan, but rather conditions for surrender and there’s no amount of money that can make it acceptable,” he said.

The U.S. Middle East proposal has two major components — a political piece that addresses core issues such as the status of Jerusalem and an economic part that aims to strengthen the Palestinian economy. Kushner and Greenblatt have not said if it calls for a two-state solution, a goal of past peace efforts.

“The vision for peace that we will soon put forward will be realistic and implementable, but it will require compromises from both sides,” Greenblatt told the meeting at the United Nations, which was organized by Indonesia.

“We genuinely hope both the Israelis and Palestinians will take a real look at our vision for peace when we release it, before any unilateral steps are taken,” he said.

“Some ask us ‘what if they surprise you?’” al-Maliki said. “We tell them we would have been more hopeful had they not been deaf to our appeals, blind to Israel violations and mute — at best — on the fundamentals of peace, when not actively undermining them.”