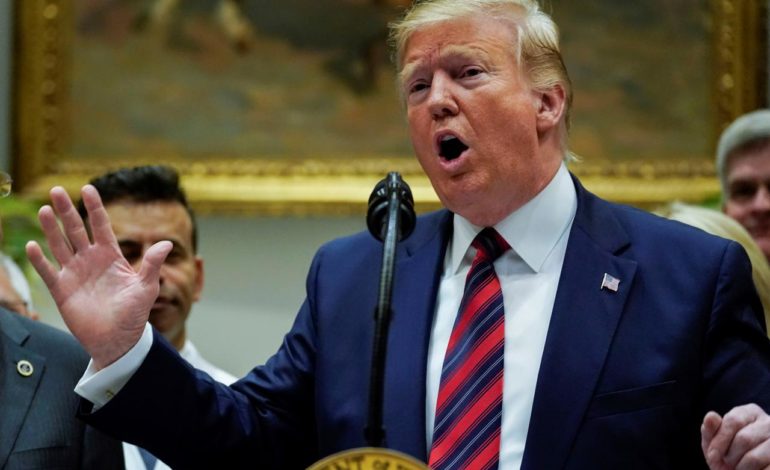 President Trump responds to questions from reporters in the Roosevelt Room at the White House in Washington, D.C., May 9. REUTERS

WASHINGTON, DC — On Thursday, President Trump urged Iran’s leadership to sit down and talk with him about giving up Tehran’s nuclear program and said he could not rule out a military confrontation given the heightened tensions between the two countries.

At an impromptu news conference at the White House, Trump declined to say what prompted him to deploy the USS Abraham Lincoln carrier group to the region over what was described as unspecified threats.

“We have information that you don’t want to know about,” Trump said. “They were very threatening and we have to have great security for this country and many other places.”

Trump was asked whether there was a risk of military confrontation with the American military presence in the area.

“I guess you could say that always, right?” he said. “I don’t want to say no, but hopefully that won’t happen. We have one of the most powerful ships in the world that is loaded up and we don’t want to do anything.”

Top members of the president’s national security team discussed Iran and other topics during what the White House called a routine meeting.

Trump, who pulled Washington out of the 2015 nuclear deal between six world powers and Iran last year, expressed a willingness to meet Iranian leaders in the past to no avail and renewed that appeal in talking to reporters.

“What they should be doing is calling me up, sitting down,” he said. “We can make a deal, a fair deal; we just don’t want them to have nuclear weapons — not too much to ask. And we would help put them back to great shape.”

He added: “They should call. If they do, we’re open to talk to them.”

Asked about Trump’s comments, Iran’s ambassador to the United Nations, Majid Takht Ravanchi, said Iran had been talking with the six powers, including the United States, within the framework of the nuclear deal.

“All of a sudden he decided to leave the negotiating table… What is the guarantee that he will not renege again?” Takht Ravanchi said in an MSNBC interview.

He dismissed U.S. allegations of an Iranian threat as “fake intelligence” and said they were “being produced by the same people who in the run-up to the U.S. invasion of Iraq did the same.”

Trump accused former Secretary of State John Kerry, who helped negotiate the 2015 Iran nuclear deal that Trump withdrew from, of breaking a federal law by having contacts with the Iranians.

Trump said Kerry had violated the 1799 Logan Act, which makes it a crime for individual American citizens to negotiate with foreign governments that have a dispute with the United States.

“He’s talking to Iran and has many meetings and many phone calls and he’s telling them what to do,” Trump said. “That is total violation of the Logan Act.”

“He’s wrong about the facts, wrong about the law and sadly he’s been wrong about how to use diplomacy to keep America safe,” the spokesman said. “We’d hope the president would focus on solving foreign policy problems for America instead of attacking his predecessors for theater.”

A deputy head of Iran’s Revolutionary Guards said that Tehran will not hold talks with its arch enemy the United States and that Washington “will not dare launch military action against us”, the semi-official news agency Tasnim reported on Friday.

“No talks will be held with the Americans and the Americans will not dare take military action against us,” Yadollah Javani, the Guards’ deputy head for political affairs, was quoted as saying by Tasnim. “Our nation … sees America as unreliable.”