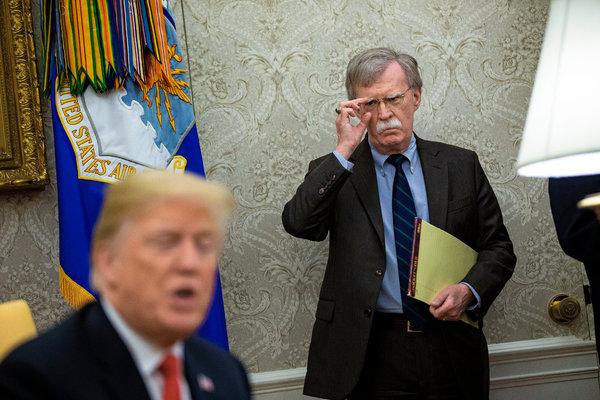 National Security Advisor John Bolton’s announcement this week that the U.S. is deploying a carrier strike group and a bomber task force to the U.S. Central Command region seemed perfectly framed to put America on a war footing with Iran. And it is.

Claiming that the decision was made in response to “a number of troubling and escalatory indications and warnings”, Bolton declared that “the United States is not seeking war with the Iranian regime.” But, he added, “We are fully prepared to respond to any attack, whether by proxy, the Islamic Revolutionary Guard Corps or regular Iranian forces.”

It took the Defense Department a full day to respond to Bolton’s statement, with acting Secretary of Defense Pat Shanahan finally tweeting that the “announced deployment of the @CVN_72 and a @USAirForce bomber task force to the @CENTCOM area of responsibility…represents a prudent repositioning of assets in response to indications of a credible threat by Iranian regime forces.”

The USS Abraham Lincoln battle group had deployed a month ago from its Norfolk, Virginia, home port and was recently engaged in maneuvers in the Mediterranean Sea. The Pentagon acknowledged that the Abraham Lincoln was scheduled to support CENTCOM during its deployment, but that its arrival was being “accelerated” due to intelligence indicating an imminent Iranian threat.

The fact that Bolton chose to repurpose routine deployments of U.S. military forces into the Middle East as an emergency response to an unspecified threat from Iran is in and of itself a curiosity. Bolton is an advisor to the president, a non-statutory (i.e., not confirmed by the Senate) member of the White House staff who is not in the military chain of command and lacks any command authority.

While Shanahan followed up indicating that the orders for the deployments had been authorized by him the day of Bolton’s announcement, this simply isn’t the case—they were authorized well prior to Bolton’s statement. The fact that the White House announced the deployment of U.S. military forces in response to allegations of an emerging threat in the Middle East, as opposed to by the Pentagon, reflects the political and operational roots of the current crisis.

“U.S. Central Command [CENTCOM, the U.S. unified military command responsible for the Middle East] continues to track a number of credible threat streams emanating from the regime in Iran throughout the CENTCOM area of responsibility,” a CENTCOM spokesman noted after Shanahan’s tweet.

This threat was deemed serious enough for Secretary of State Mike Pompeo to cancel a long-planned visit with Germany’s Chancellor Angela Merkel. Pompeo instead made a secret trip to Baghdad, where, according to reports, he met with Iraq’s political and national security leadership to discuss the emerging threat from Iran.

In a statement made to reporters on his way to Baghdad, Pompeo declared that “it is absolutely the case that we have seen escalatory actions from the Iranians, and it is equally the case that we will hold the Iranians accountable for attacks on American interests.” He added, “If these actions take place, if they do by some third-party proxy—a militia group, Hezbollah—we will hold the Iranian leadership directly accountable for that.”

But the reality is that the deployment of American military forces and the diversion of the secretary of state to Baghdad is little more than grand theater. This is being done in support of a policy dictated by Israeli intelligence and passed to Bolton during a meeting on April 16 at the White House, where, according to Bolton, they discussed “Iranian malign activity and other destabilizing actors in the Middle East and around the world.”

The intelligence, derived from analysis conducted by the Mossad, consisted of “scenarios” regarding what Iran “might” be planning. According to an Israeli official, “It is still unclear to us what the Iranians are trying to do and how they are planning to do it, but it is clear to us that the Iranian temperature is on the rise as a result of the growing U.S. pressure campaign against them, and they are considering retaliating against U.S. interests in the Gulf.”

The precise nature of the supposed Iranian threat hasn’t been officially articulated by either the White House or the Pentagon. CENTCOM had nebulously noted that “recent and clear indications that Iranian and Iranian proxy forces were making preparations to possibly attack U.S. forces in the region” and added that the threats were both maritime and on land.

However, CNN, citing unnamed Pentagon officials, has reported that specific intelligence that Iran was moving short-range ballistic missiles by boat into the Persian Gulf, combined with other indicators, is what triggered the military deployment, and that additional deployments of American forces, including Patriot PAC-3 surface-to-air missiles, was being considered. “It’s not clear if Iran could launch the missiles from the boats or if they are transporting them to be used by Iranian forces on land,” CNN reported.

The Fateh-110 has been exported to Hezbollah, Syria, the Houthis in Yemen and militias in Iraq. In September 2018, the Islamic Revolutionary Guard Corps (IRGC) fired seven Fateh-110 missiles against Iranian Kurdish opposition forces based in northern Iraq. An even more advanced derivative of the Zelzal-2, known as the Zulfiqar, has recently entered service; in June 2017 and in October 2018, the IRGC fired Zulfiqar surface-to-surface ballistic missiles against ISIS targets located inside Syria.

These missiles are real and they do pose an active and ongoing threat to American forces deployed in the Middle East. But they are not designed to be operated aboard a ship. Iran has already been accused of supplying Houthi rebel forces with short- and medium-range ballistic missiles via maritime supply routes. A continuation of this activity should hardly trigger a crisis requiring the emergency deployment of U.S. forces. Likewise, Iran has provided short-range ballistic missiles to both Syria and Hezbollah using an existing air bridge between Tehran and Damascus.

Finally, Iran has transferred short-range ballistic missiles to the Iraqi popular militias, Shiite groups affiliated with the IRGC. All this activity has taken place over the course of the past few years and, except for the Houthis, none have required missiles to be sent via sea.

The threat being promulgated by Bolton, CENTCOM, Pompeo and the media ignores the reality that Iran has been preparing to strike American military forces in the Middle East for years as part of its efforts towards self-defense. Iran’s short-range ballistic missile capability is part of a larger missile threat that could, at a moment’s notice, blanket U.S. bases in the region with high explosives. Dispatching the Abraham Lincoln battle group and a B-52 task force to the Middle East is an act of theatrical bravado that will do nothing to change that. Iran’s missile force is, for the most part, mobile.

The American experience in the Gulf War, and Saudi Arabia’s experience in Yemen, should underscore the reality that mobile relocatable targets such as Iran’s missile arsenal are virtually impossible to interdict through airpower.

By purposefully escalating tensions with Iran using manufactured intelligence about an all too real threat, Bolton is setting the country up for a war it is not prepared to fight and most likely cannot win. This point is driven home by the fact that Mike Pompeo has been recalled from his trip to participate in a National Security Council meeting where the Pentagon will lay out in stark detail the realities of a military conflict with Iran, including the high costs. (Hopefully, they’ll emphasize that Iran would win such a war simply by not losing—all they’d have to do is ride out any American attack.)

That Israel is behind the scenes supplying the intelligence and motivation makes Bolton’s actions even more questionable. It shows that it is John Bolton, not Iran, who poses the greatest threat to American national security today.