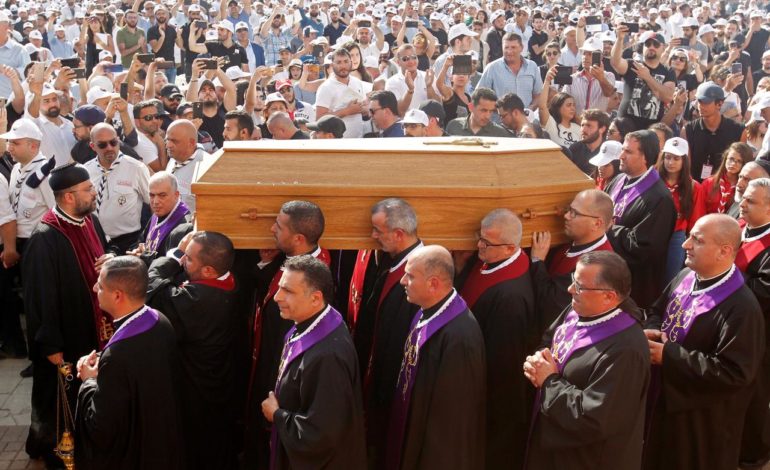 Mourners attend the funeral of Cardinal Nasrallah Sfeir, the former patriarch of Lebanon's Maronite church, at Bkerki, north of Beirut, Lebanon, May 16. REUTERS

BEIRUT — Political leaders and thousands of Lebanese gathered on Thursday for the funeral of the former Maronite patriarch, Cardinal Nasrallah Sfeir.

Ten black-clad priests with purple scarves bore his wooden coffin, marked with a cross, out of a chapel and along a purple carpet through crowds of mourners as incense wafted around.

They were led by the current patriarch, Boutros al-Rahi, wearing his burgundy mitre and robes and carrying a large cross, and by other priests holding the vestments of Sfeir, who died on Sunday at 98.

Earlier, harmonious religious chanting echoed in the bright sun at the Eastern church’s seat in a pine forest overlooking the Mediterranean on the coast north of Beirut.

Sfeir, born in the mountain village of Reifoun in 1920, was elected the Maronite patriarch in 1986 and was invested as a cardinal by Pope John Paul II in 1994 before retiring as patriarch in 2011. Mourners attend the funeral of Cardinal Nasrallah Sfeir, the former patriarch of Lebanon’s Maronite church, at Bkerki, north of Beirut, Lebanon May 16. -REUTERS

Having cast himself as a defender of Christian rights during the 1975-90 civil war, he was instrumental afterwards in effecting reconciliation between Christians and the Druze sect.

After the withdrawal of Israeli forces in 2000 following an 18-year occupation of south Lebanon, Sfeir demanded that Syria also pull out its troops that had been in the country since 1976.

The U.S. State Department described Sfeir on Wednesday as “a courageous leader against tyranny and oppression and a champion for the idea of a sovereign and independent Lebanon.”

Hariri declared Wednesday and Thursday, May 15 and 16 as official days of mourning.