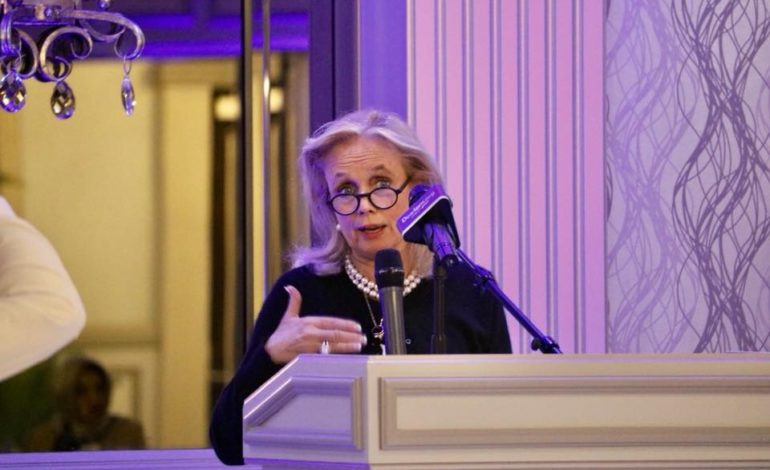 Wayne County Commissioner Sam Baydoun, who emceed  the event, started the evening by asking the guests for “a moment of silence to remember our dear friend , the former Dean of the House, Congressman John Dingell”

“Today more than ever, it is important to recognize that Islam stands for peace,justice, family and community. It must be acknowledged that our Muslim brothers and sisters are critical parts of the diverse American fabric that makes up our great nation. ” Baydoun said.

Baydoun thanked Congresswoman Debbie Dingell for defending the constitution and the American values. “We thank you for defending our community when we come under attack .. and we thank you for hosting us tonight to break our fast with you in the company of great people.”

Dingell, whose husband, John Dingell, the former “Dean of the House”, passed away in February after a long career spent working with and defending the local community, pledged to make the event an annual tradition.

“I’m really doing this because I want to thank you,” Dingell said. “And I am going to do this every year, and I’m going to do it with John’s memories and his love for all of you, and it will be a celebration of what he had with you.”

Dingell said she’s seen the community grow and change over the years, especially during the large influx of Arab and Muslim Americans.

“As Jim Zogby and Osama (Siblani, publisher of The Arab American News) both said, we are stronger than we’ve ever been. This is the most wonderful community in the world. I would not live anywhere but Dearborn because you are my family.”

Zogby, the founder of The Arab American Institute in Washington, D.C., shared memories of when tabloids in Dearborn referenced the “Arab problem” in 1985, and how things have changed.

“Today’s there’s no talk about an Arab problem in Dearborn, Arabs are the solution of Dearborn,” he said, adding that schools didn’t respect Ramadan until recently.

Siblani thanked Dingell for the many stands she has taken on behalf of the Arab and Muslim American communities.

“Debbie, John would be looking at us right now and be very proud,” he said. “And thank you, Debbie, for standing up for Rashida and Ilhan when they were under attack in Washington, D.C.”

Siblani also thanked her for introducing a bill to stop drunk driving following the tragic auto accident that killed the Abbas family of Northville, for hiring two Arab American employees, Jannine A. Kadri and Ahmad Ramadan, and also for standing up for the people of Yemen against brutal attacks by their “rich neighbor”, Saudi Arabia, among other stands.

Chuck Hage, a senior loan officer team leader for Prime Lending, held a community iftar at The Lava Lounge Too in Dearborn Heights on Wednesday.

The event was the second hosted by Hage, who invited community leaders and business partners in the real estate industry. The Prime Lending Chuck Hage Team annual iftar dinner was held on Wednesday, May 15 at Lava Lounge Too in Dearborn Heights. Photo by The Arab American News

Wayne County Sheriff Benny Napoleon, a longtime friend of the community, held an annual iftar at the same location on Thursday night.The iftar was attended by local officials, friends and community leaders. Wayne County Sheriff Benny Napoleon (with microphone) and Chief of Operations Mike Jaafar at the annual iftar dinner the sheriff hosted on Thursday at Lava Lounge Too in Dearborn Heights on May 16. – Photo by The Arab American News