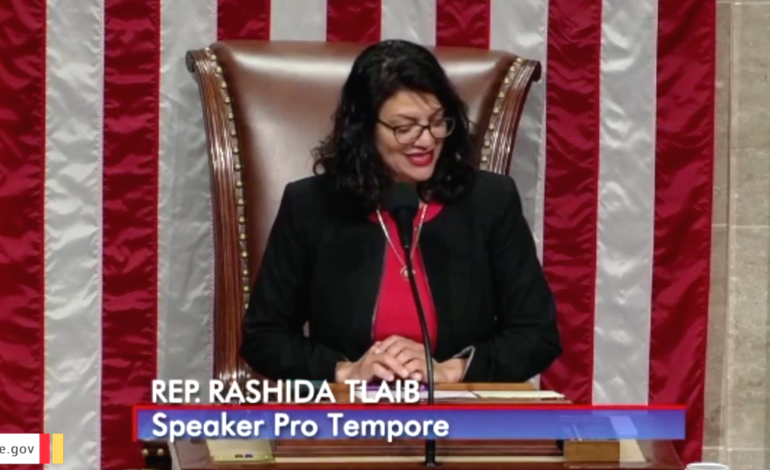 Congresswoman Rashida Tlaib (D-Detroit) became the first Muslim American woman to ever preside over the House of Representatives. Videograb

“Presided over the U.S. House of Representatives today. Not bad for a girl from Detroit that didn’t speak English when I started school & first in my family to graduate high school & college,” Tlaib wrote, celebrating the historic moment on Twitter.

Tlaib presided over a vote on a tribal lands bill with the intention of securing a federal trust status for the Mashpee Wampanoag tribe’s land in Massachusetts, a report from The Hill said.

The bill passed with support from Democrats after it was originally opposed by President Trump.

Her historic accomplishment comes as Tlaib is facing criticism for comments deemed as “anti-Semitic”, which focused on the Nakba, or “Catastrophe”, which happened on May 15, 1948 as hundreds of thousands of Palestinians were expelled from their lands to create the state of Israel. “There’s, you know, there’s a kind of a calming feeling, I always tell folks, when I think of the Holocaust and the tragedy of the Holocaust, and the fact that it was my ancestors — Palestinians — who lost their land and some lost their lives, their livelihood, their human dignity, their existence, in many ways, had been wiped out,” Tlaib said in an interview that was broadcast earlier this week.

“I mean, just all of it was in the name of trying to create a safe haven for Jews, post-the Holocaust, post-the tragedy and the horrific persecution of Jews across the world at that time.”

Some on the right have criticized Tlaib for the remarks and demanded an apology, while fellow Democrats have defended her. Bernie Sanders, the former presidential candidate, suggested that the criticism may stem from her Muslim faith.

Tlaib said in the following in response to the backlash:

“Policing my words, twisting & turning them to ignite vile attacks on me will not work. All of you who are trying to silence me will fail miserably. I will never allow you to take my words out of context to push your racist and hateful agenda. The truth will always win.”

Despite the controversy, Michigan’s history-making congresswoman continues to press forward.

“This was a proud moment & it sank in just a little more that I am serving in Congress.”