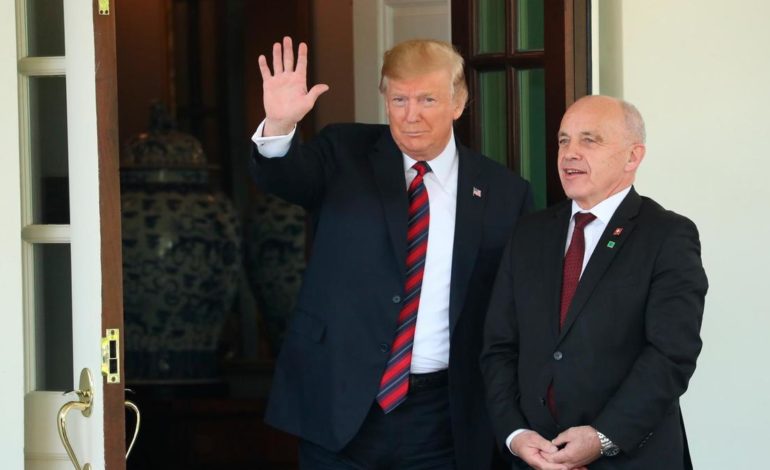 WASHINGTON, D.C. —  President Trump said on Thursday he hoped the United States was not heading to war with Iran as he met with Swiss President Ueli Maurer, whose nation has served as a diplomatic conduit between the two countries.

Asked by reporters if Washington was going to war with Tehran, Trump responded, “Hope not” as he greeted Maurer at the White House.

Also, The New York Times quoted an unidentified administration official on Thursday who stated that Trump told his acting defense secretary, Patrick Shanahan, he does not want to go to war with Iran.

Trump made the comment to Shanahan on Wednesday morning during a White House briefing on rising tensions with Iran, the newspaper reported.

Tensions have escalated in recent days with increasing concerns about a potential U.S.-Iran conflict. Earlier this week the United States pulled some diplomatic staff from its embassy in Baghdad following weekend attacks on four oil tankers in the Gulf. President Trump delivers remarks on U.S. immigration policy in the Rose Garden of the White House in Washington, D.C., May 16. – REUTERS

The attack on four oil tankers in the Gulf on Sunday, for which no one has claimed responsibility, and Saudi Arabia’s announcement on Tuesday that armed drones hit two of its oil pumping stations have compounded worries about war.

Switzerland, a neutral country, has historically been a liaison between the United States and Iran, which have no diplomatic relations.

A White House statement said the two leaders discussed “a range of international issues, including the crises in the Middle East and in Venezuela.”

“President Trump expressed his gratitude for Switzerland’s role in facilitating international mediation and diplomatic relations on behalf of the United States,” the statement said.

The Washington Post, citing unnamed U.S. officials, reported late Wednesday that Trump preferred a diplomatic route with Iran and direct talks with its leaders but worried that some of his advisers were pushing for war.

White House spokeswoman Sarah Sanders told Fox News Channel’s “Fox & Friends” that there is no friction between Trump and his advisers and he welcomes different viewpoints.

“He’s the one the American people elected,” Sanders said. “He’s going to take in the information and the guidance from all of his national security team and he then will make a decision on what he thinks is the best and safest thing for the American people.” President Trump and Speaker of the House Nancy Pelosi of Calif. attend the 38th annual National Peace Officers’ Memorial Service at the U.S. Capitol, Wednesday, May 15, in Washington. Pelosi said Wednesday that the U.S. must avoid war with Iran and she warned the White House has “no business” moving toward a Middle East confrontation without approval from Congress. -AP photo

The Trump administration does not have congressional authorization to go to war against Iran, the Democratic leader of the U.S. House of Representatives warned on Thursday amid escalating tensions in the region.

Pelosi told reporters that she backed what appeared to be President Trump’s aversion to actual military conflict with Tehran.

“I like what I hear from the president — that he has no appetite on this,” she said.

Pelosi also told reporters that the Republican administration would provide a classified briefing for top lawmakers — the so-called Gang of Eight — on Iran later on Thursday.

But Trump’s administration so far has rebuffed requests to brief the full House on Iran as it has for congressional requests seeking information on North Korea and Venezuela, she said at a news briefing.

“This is part of a pattern that is not right because we have responsibilities — the responsibility in the Constitution is for the Congress to declare war, so I hope the president’s advisers recognize that they have no authorization to go forward in any way,” Pelosi said.

The Authorization to Use Military Force (AUMF) law passed in 2001 cannot be used to authorize action in Iran, she added. Meanwhile, Iran’s foreign minister said on Thursday that his country is committed to its obligations under an international nuclear deal despite the U.S. withdrawal from the landmark agreement, calling the reimposition of U.S sanctions “unacceptable.”

Foreign Minister Mohammad Javad Zarif made the comments in a meeting with his Japanese counterpart in Tokyo as tensions rise in the Middle East, fueling concern that the United States and Iran are heading for conflict.

Iran is exercising “maximum restraint in spite of the fact the United States withdrew from (the) JCPOA last May,” Zarif said at the beginning of his meeting with Japanese Foreign Minister Taro Kono.

“We believe that escalation by the United States is unacceptable and uncalled for,” Zarif told Kono in front of reporters before they met privately.

“I’m concerned that the situation in the Middle East is becoming very tense,” Prime Minister Shinzo Abe told Zarif during their meetings.

Kono said it was essential to maintain the nuclear agreement and urged Iran to keep implementing it, echoing other countries.

Zarif: The ‘B-team’ will commit political suicide if their warmongering continues

Speaking to reporters in Tokyo on Thursday, after meetings with Kono and Abe, Zarif said, “The B-team will commit a [political] suicide if they continue their warmongering.”

“Does the civilized world accept the U.S. regime’s bullying against those who have followed the United Nations’ Resolution?” Zarif added.

The Iranian diplomat had previously censured the B-team for putting all-out efforts to throw the Middle East region into chaos.

Zarif reiterated that “Iran will not be the party that begins to escalate tensions, but would defend itself and respond to any threats against its national security.”

He described his visit to the East Asian country as a good opportunity to discuss the tense situation.

Zarif said he discussed with Kono how to prevent a further escalation of tensions, and how the international community could step in to save the 2015 nuclear deal signed with major world powers.

He called Japan an important economic partner and asked Tokyo to play a positive role. He said he hoped Japanese companies would maintain their business ties with Iran.