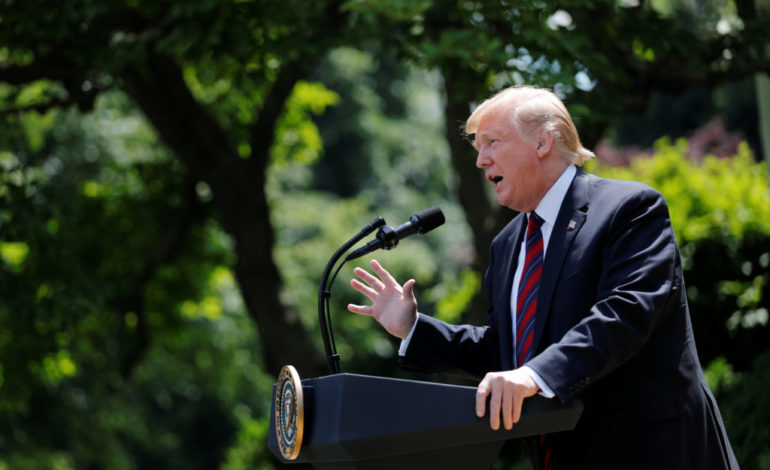 President Trump delivers remarks on U.S. immigration policy in the Rose Garden of the White House in Washington, U.S., May 16, 2019. - REUTERS

WASHINGTON, D.C. — President Trump said he wants to overhaul the immigration system to favor young, educated, English-speaking applicants with job offers instead of people with family ties to Americans, a plan with little chance of advancing in Congress.

Trump’s plan, roundly panned by Democrats and immigration advocacy groups, is aimed at trying to unite Republicans — some of whom want to boost immigration, while others want to restrict it — ahead of the November 2020 presidential and congressional elections.

“If for some reason, possibly political, we can’t get the Democrats to approve this merit-based, high-security plan, then we will get it approved immediately after the election when we take back the House (of Representatives), keep the Senate and, of course, hold the presidency,” Trump said in a Rose Garden address to Republican lawmakers and Cabinet members.

Currently, about two-thirds of the 1.1 million people allowed to emigrate to the United States each year are given green cards granting permanent residency because of family ties.

Trump proposed keeping the overall numbers steady, but shift to a “merit-based” system similar to one used in Canada — a plan he said would result in 57 percent of green cards to be based on employment and skills.

Ahead of the speech, Democratic House Speaker Nancy Pelosi said “merit” was a “condescending” term.

The plan was developed by Trump’s son-in-law and senior adviser, Jared Kushner, and Stephen Miller, an adviser known for his hard line on immigration issues.

Democratic support would be needed to advance any legislation through the Republican-led Senate — let alone the Democratic-controlled House.

Senate Democratic Leader Chuck Schumer criticized the White House for failing to consult with Democratic lawmakers and said that showed the proposal was not serious.

Trump’s plan included proposals to beef up security at the border to try to prevent people from crossing illegally and legal changes aimed at curbing a flood of Central American migrants seeking asylum.

“To say it’s dead on arrival would be generous,” said Pili Tobar, deputy director of America’s Voice, a group that advocates for undocumented immigrants.

The plan also does not include provisions to help farmers and other seasonal employers obtain more guest workers, or reforms for technology visa programs.

Business groups said the plan was a good first step but emphasized solutions needed to be broader and bipartisan.

“It should also incorporate policies to improve access to temporary workers with skills needed in the marketplace and provide a practical solution for undocumented immigrants and those living under temporary relief from removal, including Dreamers,” the Business Roundtable — a group of chief executives from large companies — said in a statement.