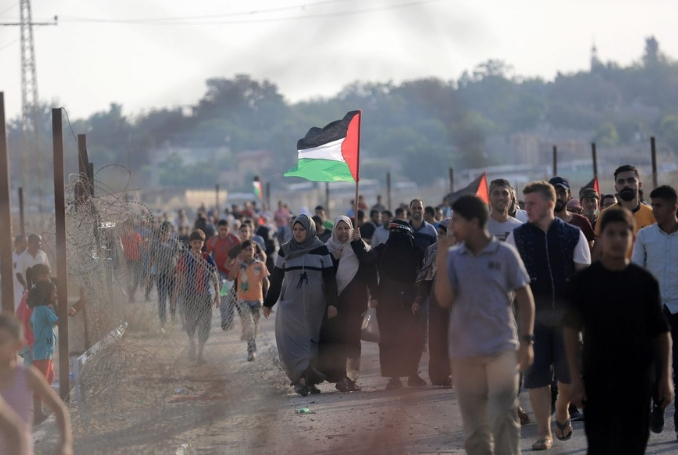 Palestinians take part in the Great March of Return. (photo: via ActiveStills.org)

The International Conference on Palestine held in Istanbul between April 27-29 brought together many speakers and hundreds of academics, journalists, activists and students from Turkey and all over the world.

The conference was a rare opportunity aimed at articulating a discourse of international solidarity that is both inclusive and forward thinking.

There was near consensus that the Boycott, Divestment and Sanctions (BDS) movement must be supported, that Donald Trump’s so-called “Deal of the Century” must be defeated and that normalization must be shunned.

When it came to articulating the objectives of the Palestinian struggle, however, the narrative became indecisive and unclear. Although none of the speakers made a case for a two-state solution, our call for a one democratic state from Istanbul — or any other place outside Palestine — seemed partially irrelevant. For the one state solution to become the overriding objective of the pro-Palestine movement worldwide, the call has to come from a Palestinian leadership that reflects the true aspirations of the Palestinian people.

One speaker after the other called for Palestinian unity, imploring Palestinians for guidance and for articulating a national discourse. Many in the audience concurred with that assessment as well. One audience member even blurted out the cliched question: “Where is the Palestinian Mandela?” Luckily, the grandson of Nelson Mandela, Zwelivelile “Mandla” Mandela, was himself a speaker. He answered forcefully that Mandela was only the face of the movement, which encompassed millions of ordinary men and women, whose struggles and sacrifices ultimately defeated apartheid. Palestinians are united, their leaders are divided

Following my speech at the conference, I met with several freed Palestinian prisoners as part of my research for my forthcoming book on the subject.

Some of the freed prisoners identified as Hamas and others as Fatah. Their narrative seemed largely free from the disgraced factional language we are bombarded with in the media, but also liberated from the dry and detached narratives of politics and academia.

“When Israel placed Gaza under siege and denied us family visitations, our Fatah brothers always came to our help,” a freed Hamas prisoner told me. “And whenever Israeli prison authorities mistreated any of our brothers from any factions, including Fatah, we all resisted together.”

A freed Fatah prisoner told me that when Hamas and Fatah fought in Gaza in the summer of 2007, the prisoners suffered most. “We suffered because we felt that the people who should be fighting for our freedom were fighting each other. We felt betrayed by everyone.”

To effectuate disunity, Israeli authorities relocated Hamas and Fatah prisoners into separate wards and prisons. They wanted to sever any communication between the prisoners’ leadership and to block any attempts at finding common ground for national unity.

The Israeli decision was not random. A year earlier, in May 2006, the leadership of the prisoners met in a prison cell to discuss the conflict between Hamas, which had won the legislative elections in the occupied territories, and the PA’s main party, Fatah.

These leaders included Marwan Barghouthi of Fatah, Abdel Khaleq al-Natshe from Hamas and representatives from other major Palestinian groups. The outcome was the National Conciliation Document, arguably the most important Palestinian initiative in decades.

What became known as the Prisoner’s Document was significant because it was not some self-serving political compromise achieved in a luxurious hotel in some Arab capital, but a genuine articulation of national Palestinian priorities, presented by the most respected and honored sector in Palestinian society.

Instead of engaging all factions in a national dialogue around the document, PA President Mahmoud Abbas gave rival factions an ultimatum to either accept or reject the document in full. The spirit of the unity in the prisoners’ initiative was betrayed by Abbas and the warring factions. Eventually, Fatah and Hamas fought their own tragic war in Gaza the following year.

On speaking to the prisoners after listening to the discourse of academics, politicians and activists, I was able to decipher a disconnection between the Palestinian narrative on the ground and our own perception of this narrative from outside.

The prisoners display unity in their narrative, a clear sense of purpose and determination to carry on with their resistance. While it is true that they all identified as members in one political group or another, I am yet to interview a single prisoner who placed factional interests above national interest. This should not come as a surprise. Indeed, these men and women have been detained, tortured and have endured many years in prison for being Palestinian resisters, regardless of their ideological and factional leanings.

The myth of the disunited and dysfunctional Palestinian is very much an Israeli invention that precedes the inception of Hamas, and even Fatah. This Zionist notion, which has been embraced by the current Israeli prime minister, Benjamin Netanyahu, argues that “Israel has no peace partner.” Despite the hemorrhaging concessions by the Palestinian Authority in Ramallah, this claim has remained a fixture in Israeli politics to this day.

Political unity aside, the Palestinian people perceive “unit” in a whole different political context than that of Israel and, frankly, many of us outside Palestine.

“Al-Wihda al-Wataniya” or national unity is a generational quest around a set of principles, including resistance, as a strategy for the liberation of Palestine, Right of Return for refugees and self-determination for the Palestinian people as the ultimate goals. It is around this idea of unity that the leadership of Palestinian prisoners drafted their document in 2006, in the hope of averting a factional clash and keeping the struggle centered on resistance against Israeli occupation.

The ongoing Great March of Return in Gaza is another daily example of the kind of unity the Palestinian people are striving for. Despite heavy losses, thousands of protesters insist on their unity while demanding their freedom, Right of Return and an end to the Israeli siege.

For us to claim that Palestinians are not united because Fatah and Hamas cannot find common ground is simply unjustified. National unity and political unity between factions are two different issues.

It is important that we do not make the mistake of confusing the Palestinian people with factions, national unity around resistance and rights with political arrangements between political groups.

As far as vision and strategy are concerned, perhaps it is time to read the prisoners’ National Conciliation Document. It was written by the Nelson Mandelas of Palestine, thousands of whom remain in Israeli prisons to this day.