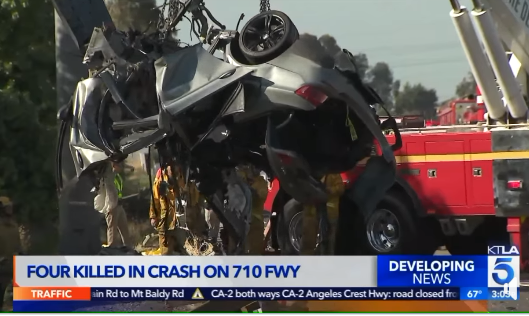 SOUTH GATE, CA — Four Arab American men were killed after a car crashed into a sign pole on Wednesday morning, a report from KABC-TV News in Los Angeles said.

The men were traveling on the 710 Freeway in South Gate before the accident, which shut down multiple northbound lanes for hours, authorities said.

The crash was reported after 3 a.m. near the Firestone Boulevard exit, California Highway Patrol said.

The driver and three passengers in a BMW sedan were pronounced dead at the scene. They were later identified as Hussein Saab, Hussein Ayoub, Hussein Ghasham and Hussein Saleh.

During the incident, two cars carrying seven men were driving down the highway, returning from a late dinner, most likely a Ramadan iftar, in Anaheim.

The driver of the lead car lost control, NBC-4 Los Angeles reported. The local Lebanese American community has been devastated by the news, the report said.

“The vehicle was traveling at a high rate of speed, lost control, and crashed into the guardrail and the pole,” CHP Sgt. Jason Lopez said to reporters at the scene.

One witness told CHP that the car’s driver had been racing with another vehicle before the collision. Reports of cars racing on the freeway prior to the crash were recorded as well.

The car’s engine was ejected from the vehicle and ended up in a ditch nearby, the KABC report said.

“What we do know, just based on the evidence that we have, is that the vehicle made some type of turning input which caused it to lose control,” Lopez said.