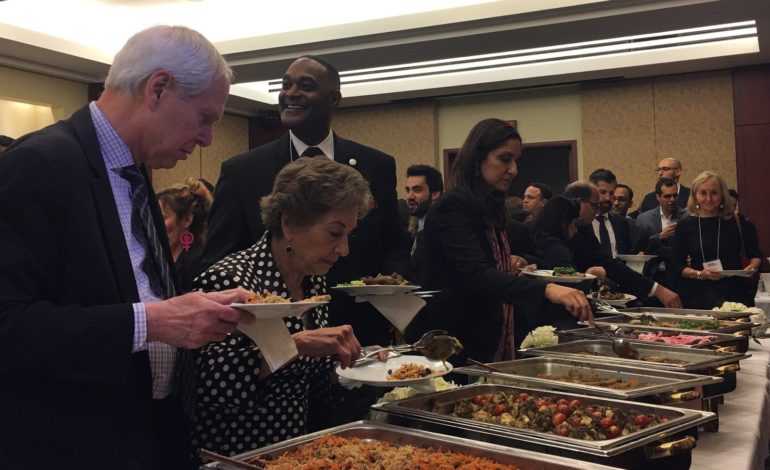 “It’s about developing understanding for the kind of struggles others go through when they go without. It’s about having deeper empathy,” said Omar, who abstains from food and even her favorite coffee during the Muslim holy month, according to a report from The Washington Post.

As Omar wrapped up her speech, she spotted Khizr Khan in the crowd, the Muslim Gold Star father (of a slain U.S. soldier) who was famously mocked by then-candidate Donald Trump during the 2016 presidential election.

Khan’s wife, Ghazala, was belittled in comments from Trump that year.

The Republican candidate said Khizr Khan delivered an entire speech because his wife was not “allowed” to speak.

“Maybe she wasn’t allowed to have anything to say,” Omar said at Monday’s iftar, a dig at the president’s 2016 comment.

“Little did they know they were going to get the two loudest Muslim women in the country in Congress!” Omar added in reference to her colleague, U.S. Rep. Rashida Tlaib (D-Detroit), to cheers from the largely-Muslim audience.

Both Omar and Tlaib kept their remarks short that evening, while hugging friends and exchanging the seasonal greeting “Ramadan Mubarak.” Several supporters in the audience told them to “stay strong” in the midst of continued criticism from the far right.

“Everything that they say is picked apart, 10 times more, every single day, no matter what it is,” said Haval Salih, a worker in the medical field who was invited by a friend, according to a report from NPR. “It just shows how strong they are. They’re still here, they’re still pushing for change, they’re still giving us hope.”

The iftar was organized by the nonprofit Muslim Advocates, in coordination with the offices of Tlaib, Omar and longtime Democratic Rep. André Carson, who is also a Muslim American lawmaker.

Meanwhile, President Trump, who has been roundly criticized for anti-Muslim and anti-immigrant rhetoric and policies, issued a Ramadan greeting this year, calling for work toward “a more harmonious and respectful society.”

Trump’s White House iftar was held the same night, with an audience consisting of mostly diplomats. Trump did not host the event in 2017.

Many Muslim advocacy groups, including the Council on American-Islamic Relations, said they would not have attended the event anyway due to Trump’s anti-Muslim and anti-immigrant rhetoric, according to the website Voice of America.

“It would be very, very awkward for us to be there, in the presence of a president who is anti-Muslim, anti-immigrants, who supports White supremacy and racist policies against communities of color and minorities,” said Nihad Awad, executive director of the Council on American-Islamic Relations (CAIR), the largest Muslim civil liberties advocacy organization in the United States.