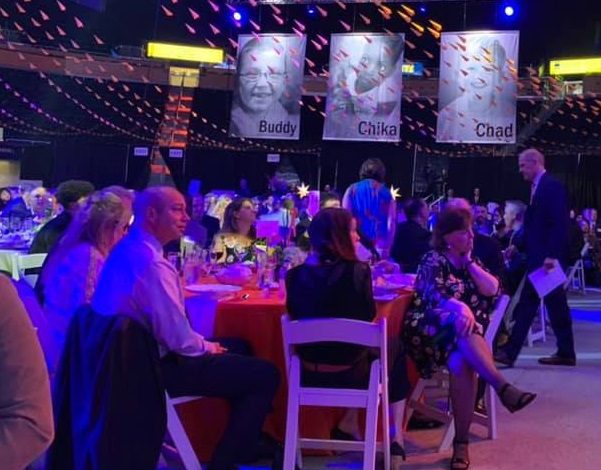 ANN ARBOR —The University of Michigan’s academic and athletic communities, friends, supporters and well wishers gathered at the Crisler Center this past Saturday, helping to raise more than $1.2 million to help combat the deadliest form of pediatric brain cancer, Diffuse Intrinsic Pontine Glioma (DIPG), and for the Chad Carr Pediatric Brain Tumor Center.

Saad and Carr go way back, to their time together in Riverview, where Saad started Michigan Fuels and Carr held an annual football camp. The relationship between Saad and Carr has lasted ever since.

“We’re a large company and we get a lot of phone calls from people wanting us to give to their charities,” said Michigan Fuels VP of Operations Brian Misfud on the ChadTough website, “and we do. But we had to make a decision on what we wanted to be known for … what’s important to us. “Bill and I realized that was kids, education and sports. So we decided to focus our money on Lloyd Carr’s Hall of Fame football camp and C.S. Mott Children’s Hospital.”

At Saturday’s gala, Saad was among those in the audience watching Chad’s mother, Tammi Carr, who spoke about her late son’s short life and what she believes was his purpose on Earth.

“It was to inspire people,” she said, as she held back tears. “I believe that with all of my heart.

“All of these babies were taken too quickly by the monster that is DIPG.”

The disease is extremely difficult to treat in large part because of where the tumors appear, on a small part of the brain stem that controls many key bodily functions. One ChadTough doctor called it “the worst kind of tumor in the worst possible place.” Surgical removal of the tumor is not possible, and while radiation can be used to shrink the tumor, it often grows back.

Mallad, who built a Red Effect infrared fitness center in Ann Arbor recently, was first approached about the Foundation by John Wangler, a former Michigan football star with close ties to the Carr family.

He said that the urgent need to find a cure helped lead to his decision to make Red Effect a partner.

“It’s very simple, it’s an incredible cause that we’re incredibly privileged to be a small part of,” Mallad said. “We’ve pledged our commitment to support the ChadTough Foundation around the world as we continue to grow with our company, Red Effect Infrared Fitness.”

Mallad called Saturday’s gala an “incredible event” and noted the support from big names in the sports world, including former Michigan basketball coach John Beilein, who just left the school for an NBA job with the Cleveland Cavaliers, and Dick Vitale, the famous college basketball announcer and longtime cancer research evangelist.

“It was unbelievable, very passionate, very heartwarming, just an incredible foundation,” Mallad said. “We want this foundation to be heard around the world, so we can find a cure.”

In an interview with The Arab American News, Lloyd Carr spotlighted Mallad for his “great enthusiasm” and also thanked Saad and Misfud for their support.

“He’s been lights out, he’s been a tremendous help,” Carr said about Saad.

“He’s played a great role in helping us raise the funds, because that’s really what this disease comes down to. We’ve got to be able to raise enough money that we can bring great researchers and scientists and doctors here to attack this disease.”

Carr said he’s “very enthusiastic” about the strides the organization has made thanks to the support of donors like Mallad and Saad, among many others.

“I think we have a major goal and that goal is from the beginning to do everything we could to help raise awareness and help find a cure through research,” he said.

“We made a great stride Saturday night, but it’s a big goal and we’ve had just incredible support from people all over the Midwest.

“We’ve been very happy to put together a team of people who are really committed to reaching that goal.”