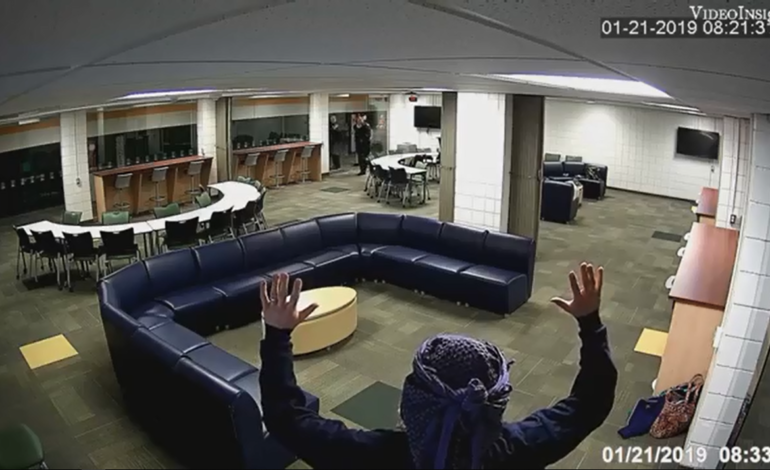 PITTSBURGH – The Council on American-Islamic Relations (CAIR) has joined other anti-discrimination and Muslim rights organizations in condemning the Penn-Trafford School District for allowing a teacher to wear a keffiyeh while acting as a would-be shooter in an active-shooter drill.

Video of the drill was produced by the school district’s audio-visual department and then posted on Facebook, where it got attention and criticism. The video, since taken down by the district, shows teachers, students, administration and police participating in a mock active-shooter drill.

At one point, a man in a purple keffiyeh is told to surrender and get on his knees by the police as they enter the school room he’s in. The person playing the assailant is an unidentified teacher at the school who volunteered to play the shooter.

The school district released a statement on its website last week denying any intent to portray a particular race or religious persuasion in the drill.

“These volunteers were provided costumes and accessories by the consultant group to alter their appearance so that they were not readily recognizable by their co-workers,” the statement said. “There was no intent to represent any particular culture or religion.”

The drill was conducted in January. Though the district took down the video, a former student was able to save it in a drive folder and share it.

The incident got national attention last week, especially from those who observe instances of discrimination against Arab Americans and Muslim Americans.

Ibrahim Hooper, national communications director for CAIR, told The Arab American News that this type of profiling is characteristic of a culture of normalized racism in the country.

“This (incidence) is symptomatic of the a whole wave of Islamophobia and anti-immigrant sentiment nationwide that we’ve seen with the rise of Donald Trump,” he said. “This is something that needs to be addressed by the district in a serious manner instead of being dismissed.”

“Quite often in popular culture, Muslims, Arabs and people of color are represented with certain imagery, which impacts the collective imagination around Muslims,” Tekelioglu said.

“This creates a scenario whereby by a someone putting together an active-shooter or other terror related scenario can use a signifier like a kaffiyeh without any consideration for how it may appear to signal out Muslims as bad people. This is how otherization can impact the public imagination.”

Tekelioglu sits on the Inclusion and Equity Committee for Pennsylvania’s Department of Education. He plans to bring this case to an upcoming committee meeting in June. He also plans to create guidelines for local school districts to ensure negative signifiers of Muslims are eradicated from daily school practices in the state.

CAIR’s Pittsburgh chapter, located near the school district, plans to issue a letter to the district and to meet the school superintendent and principal to urge them to see the harmful effects of negative stereotyping. If asked, the chapter will also offer sensitivity training to the school.

According to the Pittsburgh Post-Gazette, the greater Pittsburgh area is home to more than 10,000 Muslims.