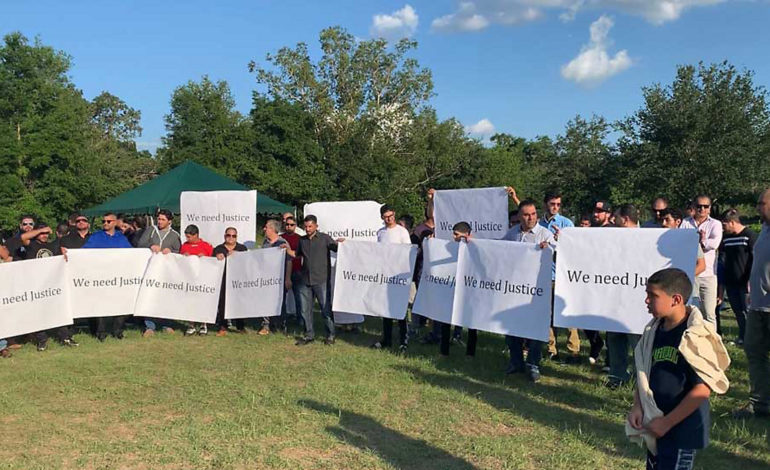 HILLSBOROUGH COUNTY, FL — Family and friends gathered outside of a Tampa Bay area mosque on Monday for both a funeral and a protest, calling on local authorities to arrest a suspect in a recent shooting.

Mourners at the funeral for Rafat Saeed joined together outside of Al Qassam Mosque, carrying his casket before protesting the lack of an arrest in the case.

Signs at the protest portion of the day read, “We need justice”, according to a report from Bay News 9.

The protesters called on the Hillsborough County Sheriff’s Office to take a longer look at the case and to arrest the alleged shooter, the report said. The shooter, whom protesters said knew Saeed, was not arrested, but is reportedly cooperating with the investigation.

One protester, family friend Manwar Alshammari, wondered why police decided to release the alleged shooter the next day.

“(Saeed) was on his way to his home through the parking lot to his house,” said another family friend, Rian Haomodi. “It’s not like he went to the prayer to talk to them or looking for trouble. No, the other man was looking for trouble and waiting for him.”

Haomodi accused the mosque of a cover-up for financial reasons, which the mosque has denied.

Several complaints have been made in the past against the unnamed alleged shooter, who was said to have become aggressive at the mosque.

According to Bay News 9, an off-duty deputy was working as a security guard at the mosque when the shooting happened. A firearm was recovered from the scene and the suspect was cooperative. Thus far, no charges have been filed and the investigation is still ongoing.

Saeed, who was 36, was from Iraq and had just become a U.S. citizen this week.

“He’s loved by the whole community; he helped everyone,” his friend Hatem Naji said to The Ledger newspaper. “A very humble man, very giving, very caring.”