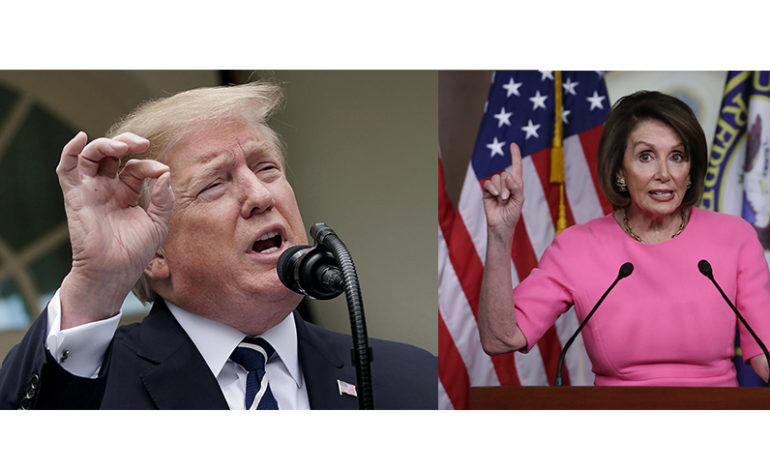 Speaker Pelosi and President Trump exchange insults and accusations after an intense meeting at the White House, where the president stormed out of a meeting with Congressional Democratic leaders

WASHINGTON, D.C. – House of Representatives Speaker Nancy Pelosi said on Thursday she wished President Trump’s family or staff would conduct an “intervention” with him for the good of the country after he threw what she called a temper tantrum at a meeting with Democratic congressional leaders a day earlier.

Trump fired back, questioning Pelosi’s mental state by saying she has “lost it” while calling himself an “extremely stable genius.”

As the acrid fight intensified between the Republican president and the Democrats who control the House amid talk of impeaching Trump, work on a two-year federal budget deal has ground to a near standstill as the task of basic governing in Washington has become increasingly complicated.

For a second straight day, Trump, who is seeking re-election in 2020, and Democratic leaders lobbed accusations and insults at each other after the collapse of an infrastructure deal that could have pumped $2 trillion into the U.S. economy, if lawmakers and the president had found a way to pay for it. “Again, I pray for the president of the United States,” Pelosi told reporters. “I wish that his family, or his administration, or his staff would have an intervention for the good of the country.”

An “intervention” often refers to relatives, friends or co-workers confronting an individual struggling with a intractable problem in the hope of improving that person’s behavior.

Pelosi also accused Trump of obstruction of justice, which she said could be an impeachable offense.

“The White House is just crying out for impeachment,” Pelosi said, but added that “the House Democratic caucus is not on a path to impeachment. And that’s where he wants us to be.”

Chaos swept Washington on Wednesday when Trump walked out of a White House meeting with Democrats, saying he could not work with them on an infrastructure bill as long as lawmakers are investigating him. Pelosi had earlier accused him of engaging in a “cover up” over investigations of Russia’s meddling in the 2016 U.S. elections and other matters. Trump responded on Thursday with a tweet that said, “The Democrats have become known as THE DO NOTHING PARTY.”

Last December Congressional leaders negotiated an agreement on federal spending that they’d been assured Trump would support, only to have him back out at the last minute, triggering a prolonged, partial shutdown of the U.S. government.

There also is little evidence that lawmakers and the administration will unify to address the issue of immigration along the southern border with Mexico. Also in doubt is whether Congress will approve a U.S.-Canada-Mexico trade agreement this year, negotiated by Trump’s administration.

Pelosi wrote on Twitter, “When the ‘extremely stable genius’ starts acting more presidential, I’ll be happy to work with him on infrastructure, trade and other issues.”

Trump is stonewalling multiple congressional inquiries into him, his policies, family and business holdings, while Pelosi has worked hard to tamp down demands among some Democrats to begin impeachment proceedings. Some Democrats fear that launching the impeachment process in Congress established in the U.S. Constitution to remove a president from office could backfire and benefit Trump politically.