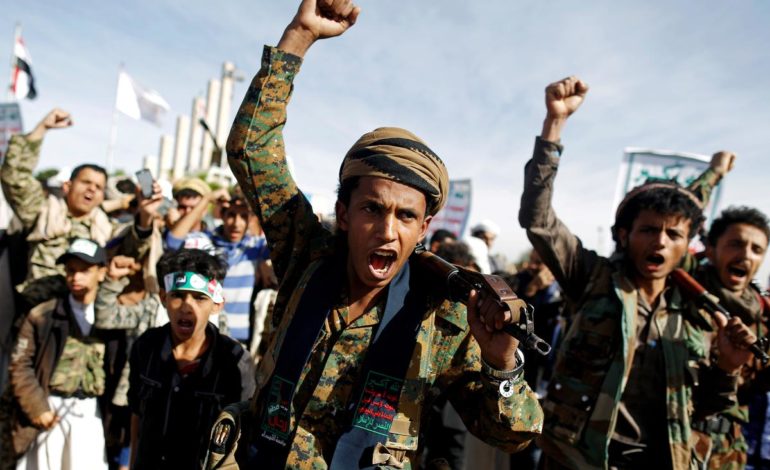 Supporters of the Houthi movement shout slogans as they attend a rally to mark the 4th anniversary of the Saudi-led military intervention in Yemen's war, in Sanaa, Yemen March 26, 2019. File photo

DUBAI — On Thursday, Yemen’s Iran-aligned Houthi movement  launched a drone attack on a Patriot missile battery in the airport of the Saudi city of Najran near the Yemeni border, the group’s Al-Masirah TV said on Thursday.

The Saudi-led coalition fighting the Houthis said the drone was intercepted and destroyed by the kingdom’s air defenses.

The Houthis, who ousted the Saudi-backed Yemeni president from power in the capital Sanaa in 2014, have stepped up missile and drone attacks on Saudi Arabia in the past 10 days in a resurgence of tactics that had largely subsided since late last year amid United Nations-led peace efforts.

The group claimed responsibility for last week’s armed drone strikes on oil assets in Saudi Arabia and on Sunday said they would attack 300 vital military targets in Saudi Arabia, the United Arab Emirates and Yemen. Tension in the Gulf

This is the third Houthi strike or attempt to strike Najran in a week, according to Saudi and Houthi reports.

“The royal Saudi air defense forces intercepted a drone laden with explosives… targeting the Najran regional airport which is used by thousands of civilians daily,” a spokesman of the Saudi-led coalition said, cited by the Saudi Press Agency.

The hostilities coincide with rising tensions between Iran and Gulf Arab states allied to the United States and come just as a sensitive, U.N.-sponsored peace deal is being carried out in Yemen’s main port of Hodeidah, a lifeline for millions.