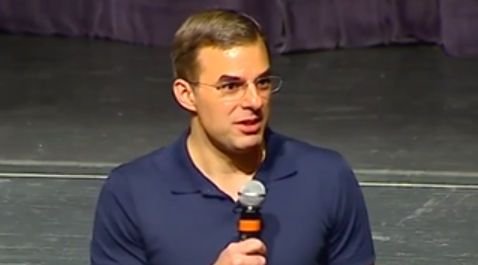 Amash, the son of a Palestinian father and Syrian mother, became the first Republican to call for Trump’s impeachment after reading the Mueller report, which he said contains content that justifies impeaching the president.

“I’m confident that if you read volume two, you will be appalled at much of the conduct,” he said. “And I was appalled by it. And that’s why I stated what I stated. That’s why I came to that conclusion. We can’t let conduct like that go unchecked.”

“I read the Mueller report. I’m sure he didn’t read it,” Amash said in reference to McCarthy. “He resorted to ad hominem attacks; that’s the kind of ‘leadership’ we now have in Congress.”

Amash is expected to face Trump-backed challenger Jim Lower in the 2020 primaries. He said he was not concerned that his remarks about the president could potentially cost him his seat.

He also faced criticism from some at the event, with one person in a “Make America Great Again” hat telling him, “I can’t tell you how disappointed I am.”

Amash doubled down on his comments during the town hall, which lasted an hour longer than normal.

“Clearly things that violate the public trust are impeachable,” he said to applause.

“I think it’s really important that we do our job as Congress. That we would not allow misconduct to go undeterred.”

The majority of guests at the town hall expressed support for Amash, a report from The Hill said.

Amash may also consider a run for president in 2020 as a Libertarian.