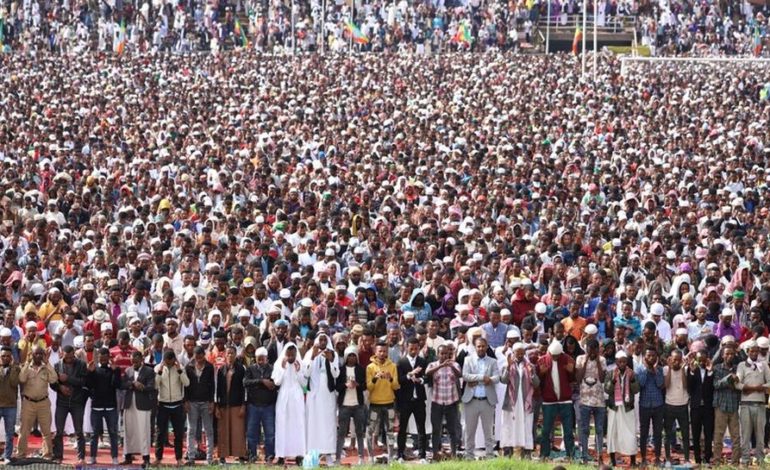 Muslims attend the morning prayers of Eid al-Fitr, marking the end of the holy month of Ramadan, in Addis Ababa, Ethiopia June 4, 2019. REUTERS

KABUL – Muslims around the world celebrated the Eid-al-Fitr religious holiday on Tuesday, marking the end of Islam’s holy month of Ramadan.

Like the start of Ramadan, during which believers abstain from eating and drinking during daylight hours, Eid-al-Fitr depends on the sighting of the moon and its celebration varies in different countries. The day begins with early morning prayers and then family visits and feasts.

In the Afghan capital Kabul, families celebrated with a stroll in a central park, and children played on a carousel.

“We came here to celebrate Eid because this day is for happiness and all the people want to see happiness. The Afghan people hope to have peace in the country,” said Abdul Raziq, a resident of the city.

Elsewhere, thousands of Muslims living in Moscow gathered in and outside the city’s grand mosque to pray. Security was high and mounted police patrolled the streets.

The Moscow Cathedral Mosque, which has capacity for 10,000 people, was packed with worshippers, many of whom hail originally from Central Asia.

After Orthodox Christianity, Islam is the second biggest religion in Russia.

“We came to pray and the place is not important. The only place we need is a place to put a rug, to pray to God, to take part in this holiday – this is the most important,” said Sivush Veriyev.

Thousands of faithful packed stadiums in Addis Ababa and Mogadishu and there were also mass prayers in the Nigerian capital Abuja as well as Juba in South Sudan.

In Bangladesh, thousands of people have been scrambling to Dhaka’s ferry terminals and stations, packing trains heading out of the city to return to their hometowns for Eid.