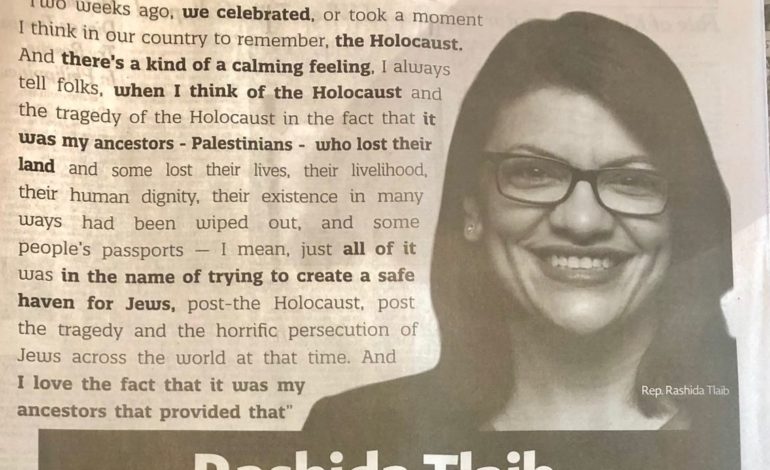 NEW YORK — The New York Times has been criticized over recent ads involving Rashida Tlaib that have been called “deceptive and dishonest” by one Arab American advocate, involving her comments on the Holocaust and Palestinians.

The ad, taken out by Shmuley Boteach, an American Orthodox rabbi, author and TV host, on Saturday, June 1, is titled “Rashida Tlaib Deceives America” and references her comments in a Yahoo News podcast last month.

“Two weeks ago, we celebrated, or took a moment I think in our country to remember, the Holocaust,” Tlaib is quoted as saying from the podcast in the ad.

“And there’s a kind of a calming feeling, I always tell folks, when I think of the Holocaust and the tragedy of the Holocaust in the fact that it was my ancestors – Palestinians – who lost their land and some lost their lives, their livelihood, their human dignity. Their existence in many ways had been wiped out, and some people’s passports – I mean, just all of it was in the name of trying to create a safe haven for Jews, post-the Holocaust, post the tragedy and the horrific persecution of Jews across the world at that time. And I love the fact that it was my ancestors that provided that,” Tlaib’s comments shared on the ad read.

The ad leaves out the last part of her comments, which read, “But they did it in a way that took their human dignity away, right, and it was forced on them,” in reference to Palestinians whose land was taken or intruded upon.

In response, James Zogby, the founder of The Arab American Institute, spoke out against the ad on his Twitter account.

“This is a dishonest & dangerous assault by far-right Shmuley Boteach. He funnels dark money into attack ads like this that distort the truth & put people’s lives at risk. It’s not an ad, it’s incitement. Shame on @nytimes for running it. #handsoffRashida.”

The ad also discusses violent incidents against Jews prior to the Holocaust, which it says led to a reduction in the number of immigrants approved by the British as part of the creation of new settlements.

However, the ad does not mention the Nakba (Catastrophe), during which hundreds of thousands of Palestinians were forced to leave their homes in the region as a result of the state’s founding.

“We don’t need to be welcomed back to our homeland, Israel,” the ad concludes.

Tlaib has received many death threats since being sworn in as the first of two Muslim American congresswomen in history, along with U.S. Rep. Ilhan Omar (D-MN).

In response, the anti-war organization Code Pink has started a petition demanding an apology and calling the ads inciteful and Islamophobic.

The petition can be viewed here.

“The Saturday, June 1, 2019 edition of The New York Times included a deplorable full-page ad purchased by known Islamophobe Rabbi Shmuel “Shmuley” Boteach that falsely twists the words of Representative Rashida Tlaib to incite hatred against one of only two Muslim members of Congress,” the petition reads.