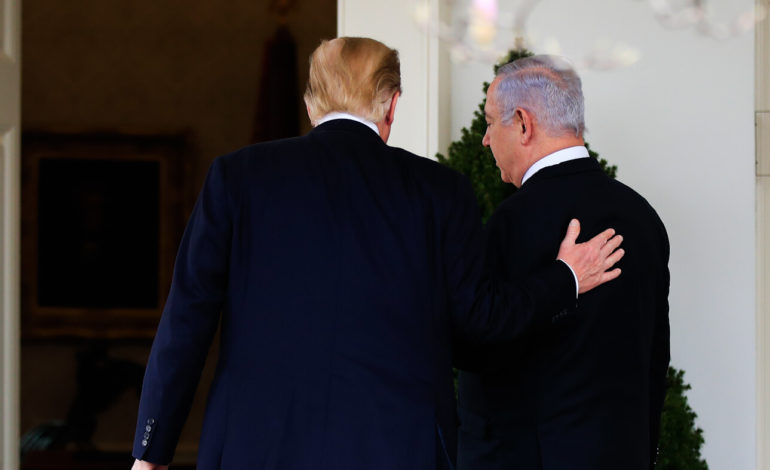 While Israeli Prime Minister Benjamin Netanyahu’s anti-ICC position is familiar, last April, President Trump virulently expressed his contempt for the global organization and everything it represents

The chief military advocate general of the Israeli army, Sharon Afek, and the U.S. Department of Defense general counsel, Paul Ney, shared a platform at the “International Conference on the Law of Armed Conflict”, which took place in Herzliya, Israel between May 28-30.

Their panel witnessed some of the most misconstrued interpretations of international law ever recorded. It was as if Afek and Ney were literally making up their own law on warfare and armed conflict, with no regard to what international law actually stipulates.

Unsurprisingly, both Afek and Ney agreed on many things, including that Israel and the U.S. are blameless in all of their military conflicts and that they will always be united against any attempt to hold them accountable for war crimes by the International Court of Justice (ICC).

Their tirade against the ICC mirrors that of their own leaders. While Israeli Prime Minister Benjamin Netanyahu’s anti-ICC position is familiar, last April, President Trump virulently expressed his contempt for the global organization and everything it represents.

“Any attempt to target American, Israeli or allied personnel for prosecution will be met with a swift and vigorous response,” Trump said in a written statement on April 12.

While Trump’s (and Netanyahu’s) divisive language is nothing new, Afek and Ney were entrusted with the difficult task of using legal language to explain their countries’ aversion for international law.

Prior to the Herzliya Conference, Afek addressed the Israel Bar Association convention in Eilat on May 26. Here, too, he made some ludicrous claims as he absolved, in advance, Israeli soldiers who kill Palestinians.

“A soldier who is in a life-threatening situation and acts to defend himself (or) others (he) is responsible for, is receiving and will continue receiving full back-up from the Israeli army,” he said.

The above assertion appears far more sinister once we remember Afek’s views on what constitutes a “life-threatening situation”, as he had articulated in Herzliya a few days later.

“Thousands of Gaza’s residents (try) to breach the border fence,” he said, with reference to the non-violent March of Return at the fence separating besieged Gaza from Israel.

The Gaza protesters “are led by a terrorist organization that deliberately uses civilians to carry out attacks,” Afek said.

Afek sees unarmed protests in Gaza as a form of terrorism, thus concurring with an earlier statement made by then-Israeli Defense Minister Avigdor Lieberman, on April 8, 2018, when he declared that “there are no innocents in Gaza.”

Israel’s shoot-to-kill policy, however, is not confined to the Gaza Strip but is also implemented with the same degree of violent enthusiasm in the West Bank.

“No attacker, male or female, should make it out of any attack alive,” Lieberman said in 2015. His orders were followed implicitly, as hundreds of Palestinians were killed in the West Bank and Jerusalem for allegedly trying to attack Israeli occupation soldiers or armed illegal Jewish settlers.

Unlike democratic political systems everywhere, in Israel the occupation soldier becomes the interpreter and enforcer of the law.

Putting this policy into practice in Gaza is even more horrendous as unarmed protesters are often being killed by Israeli snipers from long distances. Even journalists and medics have not been spared the same tragic fate as the hundreds of civilians who were killed since the start of the protests in March 2018.

Last February, the United Nations Independent Commission of Inquiry on Gaza’s protests concluded that “it has reasonable grounds to believe that during the Great March of Return, Israeli soldiers committed violations of international human rights and humanitarian law. Some of those violations may constitute war crimes or crimes against humanity, and must be immediately investigated by Israel.”

In his attack on the ICC at the Herzliya Conference, Afek contended that “Israel is a law-abiding country, with an independent and strong judicial system, and there is no reason for its actions to be scrutinized by the ICC.”

The Israeli general goes on to reprimand the ICC by urging it to focus on “dealing with the main issues for which it was founded.”

Has Afek even read the Rome Statute? The first Article states that the ICC has the “power to exercise its jurisdiction over persons for the most serious crimes of international concern, as referred to in this Statute.”

Article 5 elaborates the nature of these serious crimes, which include: “(a) The crime of genocide; (b) Crimes against humanity; (c) War crimes; (d) The crime of aggression.”

Israel has been accused of at least two of these crimes — war crimes and crimes against humanity — repeatedly, including in the February report by the United Nations Independent Commission of Inquiry.

Afek may argue that none of this is relevant to Israel, for the latter is not “a party to the Rome Statute”, therefore, does not fall within ICC’s legal jurisdiction.

While it is true that Israel is not a signatory of the Rome Statute, Palestine has, since 2015, agreed to submit itself to the ICC’s jurisdiction.

Moreover, in April 2015, the State of Palestine formally became a member of the ICC, thus giving the court jurisdiction to investigate crimes committed in the occupied Territories since June 13, 2014. These crimes include human rights violations carried out during the Israeli war on Gaza in July-August of the same year.

However, nothing proclaimed by Israel’s top military prosecutor or his government will alter the facts. Israeli war crimes must not go unpunished; Israel’s judicial system is untrustworthy and the ICC has the legal right and moral duty to carry out the will of the international community and hold to account those responsible for war crimes anywhere, including Israel.