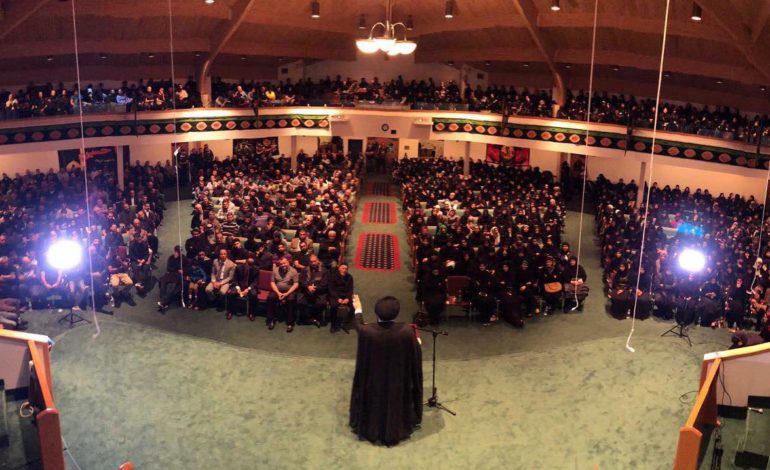 Islamic Institute of America on Ford Road in Dearborn Heights

The residents, who all reside within a few blocks of the Islamic Institute of America (IAA) at Ford Road and Kinloch Street in Dearborn Heights, took turns at the podium to urge the City Council and police to act against illegal parking on their streets.

Frida Berry’s back yard abuts the mosque’s parking lot. She said mosque attendees blocked her driveway, had loud gatherings and even fought in front of her house late at night.

“What happened this weekend was completely unacceptable,” she said. “The police chief knows what happened. The Dearborn Heights police were called to Doxtator, Kinloch and Cecil Streets multiple times. We lost our fundamental rights to the quiet and peaceful enjoyment of our homes.”

Laylat Al-Qadr celebrations meant busy Saturday and Monday nights for the mosque. The 19th, 21st and 23rd days of Ramadan are important for Islam as nights when the Quran was revealed to the prophet Muhammed.

Berry claimed that her neighborhood was packed with 5,000 people attending the mosque on Saturday, May 25.

She also said that she could hear the sermon coming over the speaker and that the mosque exceeded appropriate noise levels for the neighborhood.

“I had to go save my daughter the other day,” she said. “I had to walk over to her car and bring her in because she couldn’t get through. If anything happens to my kids, I am holding the city of Dearborn Heights and the mayor personally responsible.”

According to IAA board member and Dearborn Heights resident Danielle Elzayat, the mosque doesn’t have speakers.

“We don’t have loudspeakers outside of our building,” Elzayat told The Arab American News. “We opened some of the windows in our prayer room during a particularly warm night, which open partially by design. Perhaps this was the noise our neighbor heard during prayer.”

The nearby Crestwood High School routinely broadcasts over its loudspeakers during sporting events.

Berry’s property is located south of the prayer room, down the alley that stretches the length of the entire building. Her house has a substantial backyard with a fence that separates it from the mosque’s parking lot.

She said at the meeting that she and her neighbors were repeatedly harassed and verbally abused when they asked mosque attendees to move cars that blocked their driveways.

Three other residents also made public comments about similar incidents. One resident said she called the police on people parked on the street in front of her house because those were spaces her family used. She said a police officer told her that they could not ask people to move their cars when they were parked legally on the street in a public parking zone.

A resident from Fenton street, close to a mile northeast of the mosque, said he was alarmed by the traffic on Telegraph and Ford Roads during the weekend. He said he often sees drivers going up to 70 mph on side streets and that this weekend was no different.

“When I moved here back in 1999, this was a nice peaceful place,” he said. “I don’t know why we can’t get something done about these people that don’t obey our laws.”

Police Chief Dan Voltattorni told The Arab American News that the department only received a few calls from the same resident during the three days. He said he reviewed tapes from the weekend in question and saw a few cars parked close to stop signs, but not on front yards, as residents alleged during the City Council meeting.

Police were able to get a few mosque attendees to move their cars and issued a ticket to another vehicle that was parked on the greenway between the sidewalk and the curb.

At the City Council meeting, Voltattorni addressed the issues raised by residents.

“I won’t argue with the concerns raised here,” he said. “I could argue that there was no one doing 60 to 70 miles an hour down the side street, but I won’t do that.

“Its hard to believe that (the situation) was as bad as it was stated. That being said, there were officers out there and we know that there were a lot of people out on those nights.”

One of the residents had said cars parked on both sides of her street had restricted movement for residents, especially those that may need fire and ambulance services due to medical conditions.

“We did a traffic study and found that emergency vehicles can get through if there are cars parked on both sides of the street,” Voltattorni said. A view of Doxtator Street near Kinloch. – Photos by The Arab American News Elzayat said the mosque wishes nothing but good relationships with its neighbors.

“A neighbor came to us on Monday telling us that someone had parked their car in her driveway while she was away for the weekend,” she told The Arab American News.

“She also said she had gotten into an argument with some mosque goers on her street,” she added. “We told her that we do not condone any sort of harassment and that we were willing to remedy the situation however we could. It was raining that night so I offered to drive her home and see if she could point out with car she had trouble with. She could not confirm which one it was.”

Elzayat worked with police to make announcements between prayers. She also said that she received calls from several residents over the weekend who were happy to offer parking spaces for the mosque attendees.

“They called to let us know that they don’t have anything against the mosque or the congregation and that people were welcome to park in their driveways if they need to,” she said.

Contrary to Berry’s claim, the mosque is not equipped to hold 5,000 people. The pews left over from when the building was a church act as a community gathering room. Prayers are held in a separate room next to the back alley. The prayer room is equipped to hold approximately 505 people.

The parking lot has 213 spots, 6 more than the appropriate parking spots based on pew sizes in the building, according to Wade Trim, Dearborn Heights’ contracted civil engineering company. Aerial view of the mosque and its parking lot. The prayer room is located on the south side of the building down the alley from Berry’s residence. Crestwood High School is located further down Kinloch Street.

“We can’t control how fast attendees drive after they leave our mosque, or how they park in public parking spaces,” Elzayat said. “Everything the institute does have power to do, we have done. We got complaints that there was trash strewn about front lawns and I offered to pick it up myself, though no one could tell me where this was.”

Elzayat said she did not see anyone blocking residential driveways when she dropped off her neighbor at her house Monday night.

She said a representative from the mosque is working on a letter to invite neighbors to discuss future events and parking plans.