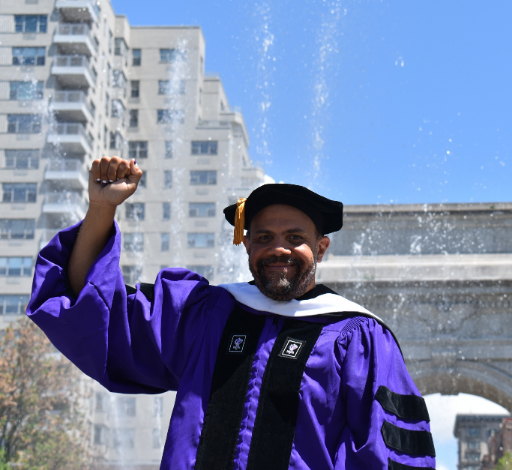 Steven Thrasher, PhD, said he was proud of the NYU student government for supporting the BDS movement

When then-graduating PhD candidate Steven Thrasher made a speech at the NYU graduation commencement last month, endorsing the BDS [Boycott, Disinvest and Sanctions] movement, some parties felt the need to disassociate from Thrasher’s views and go out of their way to express their “outrage” and “shock” at his remarks.

Thrasher, who earned his doctoral degree and gave the student address at the NYU Graduate School of Arts and Sciences commencement event, said he was proud of the NYU student government for supporting the BDS movement, calling for organizations to discontinue involvement with Israel.

“We must stand together to vanquish racism and Islamophobia and anti-Semitism and injustice and attacks on women and attacks on abortion rights in Tel Aviv, in Shanghai, in Abu Dhabi, in New York City, Atlanta, Washington,” Thrasher said during his speech.

“I am so proud, so proud of NYU’s chapters of Students for Justice in Palestine and Jewish Voices for Peace, and of the NYU student government and of my colleagues in the department of social and cultural analysis for supporting the boycott, divestment and sanctions movement against the apartheid state government in Israel,” Thrasher said.

“I found it quite objectionable that the student speaker chose to make use of the Graduate School of Arts and Science doctoral graduation to express his personal viewpoints on BDS and related matters, language he excluded from the version of the speech he had submitted before the ceremony,” Hamilton said in his statement. “We are sorry that the audience had to experience these inappropriate remarks. A graduation should be a shared, inclusive event; the speaker’s words – one-sided and tendentious – indefensibly made some in the audience feel unwelcome and excluded.”

Author John K. Wilson said in a blog post at Academe Magazine that Hamilton’s statement “confessed to some appalling violations of the principles of academic freedom and free speech on campus.” Wilson stated that the fact that Thrasher had to submit a version of the speech before the ceremony is a “violation of free speech.”

Thrasher’s endorsement of the BDS movement also led Morton Schapiro and Jonathan Holloway, the president and provost, respectively, of Northwestern University, where Thrasher is now employed, to release a statement condemning his stance.

“Many were understandably offended by some of the comments made by Dr. Thrasher during his commencement speech at New York University earlier this week,” Northwestern’s statement read. “We do not share all of his views, nor do we feel commencement was the appropriate venue to express them. However, academic freedom assures his right to hold them.”

The Arab American News reached out to Thrasher for a comment about the issue, but he did not respond.

These statements from heads of academic institutions beg the question: Is America really a free speech country? Or does it stop promoting free speech when Israel’s involved.

Hamilton confirmed that NYU’s administration would not have allowed Thrasher to give his speech if he’d submitted the complete version.

These academic restrictions sparked a debate on academic free speech, calling out NYU’s annoyance with its graduate.

Hamilton’s condemnation of Thrasher came three days after the speech, when Thrasher’s old tweets that expressed his views on Israel and the BDS surfaced.

“We were shocked when we were made aware of these undoubtedly vile and anti-Semitic tweets,” Hamilton said. “Steven Thrasher should never have been a speaker for the doctoral convocation.”

Hamilton applauded Thrasher’s speech at the commencement event, according to reports.

A number of news outlets were also quick to dig up old tweets of Thrasher’s that sympathize with the BDS movement.

Forbes, Inside Higher Ed, the Washington Times, Newsweek and CBN, to name a few, in addition to a number of Zionist and Israeli news outlets, reported on the incident, calling Thrasher’s remarks “anti-Semitic” and “inappropriate”, some even questioning whether Northwestern should rescind its employment offer.

In an article titled “In Defense of Steven Thrasher”, Wilson wrote, “It is possible to be anti-Semitic while explicitly denouncing anti-Semitism, but it’s hard to see anything like that in Thrasher’s speech, unless you accept the nonsense that anyone who supports BDS is inherently anti-Semitic.”