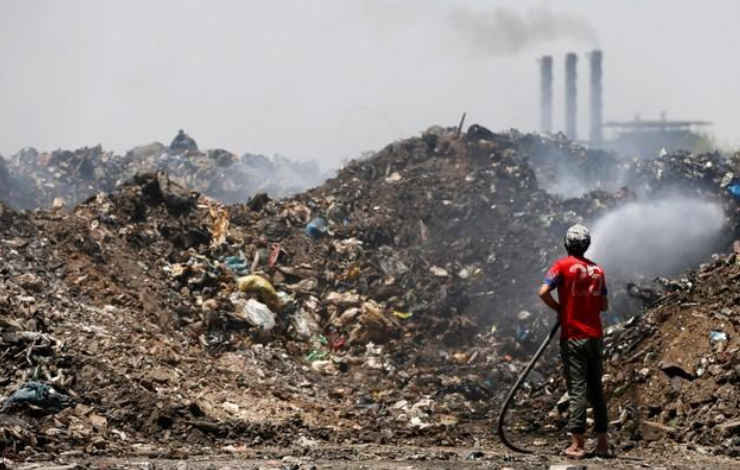 As countries mark World Environment Day, Iraqis continue to suffer from deteriorating environmental standards, with piles of trash littering the streets and a thick cloud of smoke hovering above the Iraqi capital.

BAGHDAD —Iraq is suffering from a pollution crisis as citizens struggle with life in the slums where burning trash dumped by city officials is making life miserable.

“The dirt, our children are sick, our families are sick,” said 48-year-old Adnan Kadhim, according to a report from Reuters. “My daughter has asthma and I had to take my family to the hospital last night. We had to go at 2 a.m. to give her oxygen. What have we done wrong to deserve this?”

No one in his neighborhood knows who is setting the trash on fire, but complaints to officials have fallen on deaf ears.

As the United Nations marked World Environment Day on Wednesday, Iraq continues to suffer from a pollution crisis. Trash is piling up across the country in an environment punctuated by clouds of billowing, belching smoke produced by factories that loom in the distance. Two Iraqis walking next to piles of garbage in southern Iraq

“Every day, it starts at sunset and doesn’t stop until the morning,” said Jabbar, a builder, according to the report. “You can see the tractors (shoveling trash) in front of you. We are being destroyed. We implored the government and no one did anything. We went to the municipality and still nothing.”

Officials say there is a lack of a formal waste management system in the country, but they are planning to introduce a new one. Waste disposal areas are difficult to use, deemed to be “unorganized” by officials.

Rising rates of chronic diseases such as cancer and respiratory issues, as well as birth deformities, are also being reported. Iraq is working with international bodies on a plan to clean it up, one official said, but meanwhile, its citizens are suffering.

Crude oil production is one of the biggest reasons for the country’s environmental woes, but new ovens may soon provide some relief by reducing emissions, a glimmer of hope in the heavily polluted country.

“Crude oil, if burned in an incorrect way, the way we burn it, of course, has emissions,” said Ali Rabeiy, a factory owner. “The new ovens, which we are upgrading to, will reduce these emissions by 60 percent, but that should not be the ceiling of our ambitions.”