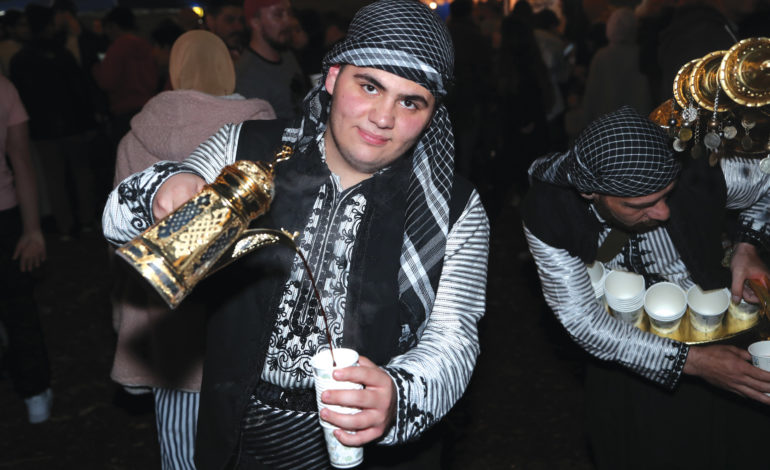 DEARBORN HEIGHTS — Community members and many attendees from other towns celebrated the farewell weekend of the Ramadan Suhoor Festival, making its second appearance at the Hype Center on West Warren Avenue.

Starting out as a pop-up festival, the Ramadan Suhoor Festival morphed into four weekends of food, celebration and unity throughout the month of Ramadan. Thousands of people, both Muslims and non-Muslims, attended what is known to be one of the largest food gatherings of its kind.

The Ramadan Suhoor Festival became a food extravaganza that served dishes as varied as shawarma, frozen yogurt and cupcakes. The festival is in its second year, and its first weekend saw more than 12,000 attendees. During the month of Ramadan, the festival took place from 11:45 p.m. to 4:00 a.m. Fridays and Saturday night through June 2. Suhoor is the pre-dawn meal Muslims have each day before fasting.

Dearborn-based pharmacist and festival organizer Hassan Chami described the festival as also a space for celebration and outreach, bridging the gap between Muslims and non-Muslims.

Chami said that Ali Sayed, the owner of Hype, offered him the land for free to host the event for all four weekends.

He said the festival is intended to be a place for people to respect the month of Ramadan as well as enjoy and congregate.

“We are here to have a good time; we are here to unite, but we must remember this (Ramadan) is the month of God,” he said.

During the late-night food festival that began on May 6, the venue was filled with food vendor carts spaced with ample room for kids to play in plain view, all amidst the darkest hours of the night.

Many people from different states, countries, religious backgrounds and races all united to enjoy the festival. It has even become a place where foodies from out of town flock in as well.

“Using our community as the foundation to build bridges with outer communities is a beautiful thing,” Chami said, adding that the festival has brought out much positivity.

Attendees appreciated the authentic vibe of the suhoor festival, for there were signs around the festival grounds that offer guidance on fasting, prayers and good deeds.

New this year was an exhibit tent for reciting the Quran, the holy book of Islam. The amplified recitations of the Quran and sayings of the Prophet Muhammad wafted along with the festival.

During the later hours near dawn, a food vendor picked the drum to call people to “walk up and eat their suhoor.” He represented the old villager in town back in the Middle East.

The farewell weekend of this leading food extravaganza featured far more than the vendors, Quran recitation and the feeling of faith and unity; the event also provided visitors with an opportunity to win a raffle ticket to either visit Mecca or the holy city of Karbala in Iraq.

Four tickets to visit Mecca were raffled and awarded, and an additional two raffles were held for the Karbala trip. Sponsors for the trips included the El-Sayed Meat Market for one of the Mecca tickets and La Fork covering costs for the Karbala trips. Fifteen anonymous donors helped sponsor the other three trips to Mecca.

Two thousand Qurans were also provided by an anonymous donor and were passed out to attendees during the farewell festival. On Friday, May 31, Eid toys and Eid gift cards were raffled for children.

To conclude the overall festival, attendees, sponsors and organizers gathered together to light up lanterns that symbolize the happiness and success of bringing together many diverse groups to celebrate the holy month.