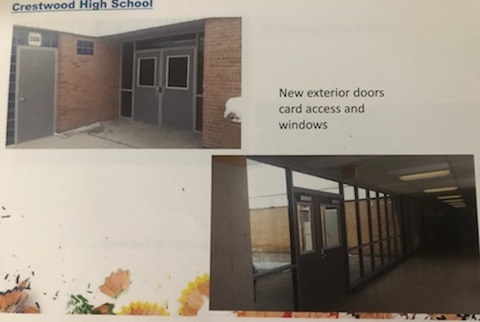 DEARBORN HEIGHTS — The Crestwood School District, home to eight schools including Crestwood High School, has seen several improvements in the months and years following the passage of a $35 million bond in May 2016, with many more to come.

The bond passage was the first of its kind in 10 years at the time and improvements are beginning to wrap up, according to board trustee Ed Garcia.

“We’re coming towards the end of the bond,” he said. “This is one of the biggest pushes forward when it comes to renovations.”

Among the improvements are new bathrooms at Riverside Middle School, along with new lockers, an auditorium and new security improvements, including a change to the school’s layout that assures outside guests must check into the office before moving further into the building.

Crestwood High School is expected to begin work on a similar layout this summer, according to trustee Nadia Berry.

Improvements abound at the high school, including a new auditorium, a renovated pool, new HVAC systems, new locker rooms, a revamped cafeteria area and the forthcoming addition of three additional summer classrooms for special education. A board office will be moved to another building to make way for the additions, according to Berry.

The old auto shop is being turned into classrooms and labs, and the cafeteria is being upgraded with new refrigeration, storage areas and more.

“We’ve got a lot of improvements to go,” Berry said, adding that next summer is expected to be the time when the high school will see most of its renovations.

This summer, the high school will also see renovations to its windows, the removal of asbestos to make way for new projects and new technological additions to classrooms.

“Over the course of the last several years we’ve gone through and done some preliminary prepping,” Garcia said. “We’re prepared for the end of the last day of school on the 14th, and plan on beginning the following day.”

The elementary schools in the district are also due for a variety of renovations.

At Highview Elementary School, workers will be taking out the current stage and putting in more seating, along with a resurfacing of the parking lots.

At Kinloch Elementary, safety features are being added to the parking lot, along with new safety sidewalks.