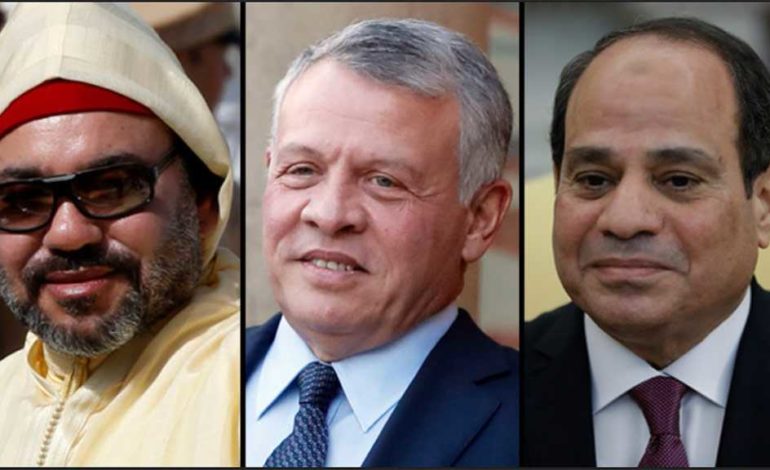 WASHINGTON — Egypt, Jordan and Morocco have told the Trump administration they will attend a U.S.-led conference in Bahrain this month on proposals for boosting the Palestinian economy as part of a coming U.S. peace plan, U.S. officials said on Tuesday.

Meanwhile, Palestinians urged Egypt and Jordan on Wednesday to reconsider their attendance at the U.S.-led conference on June 25-26, voicing concern it would weaken any Arab opposition to Washington’s coming peace plan.

The United States has billed the gathering as a workshop to boost the Palestinian economy as part of a broader diplomatic effort widely referred to as President Trump’s “deal of the century” to address the Israeli-Palestinian conflict.

Palestinian leaders, who are boycotting the meeting, say the still unpublished plan falls short of their goal of statehood. They primarily blame a halt in U.S. aid and Israeli restrictions for an economic crisis in the occupied West Bank and Gaza Strip.

The participation of Egypt and Jordan at the Bahrain meeting is considered particularly important because they have historically been key players in Middle East peace efforts and are the only Arab states that have peace treaties with Israel.

However, Palestinian leaders’ decision to boycott the June 25-26 conference in Manama has raised doubts about its chances for success. They have shunned President Trump’s “deal of the century”, which Palestinians see as likely to be heavily tilted in favor of Israel and denying them a state of their own.

“Our presence in Manama would only be used as a legitimization of the initiative that aims at depriving us of our rights,” Saeb Erekat, secretary-general of the Palestine Liberation Organization, said in a June 10 letter to foreign diplomats in the Palestinian areas.

Despite that, White House senior adviser Jared Kushner, who is also Trump’s son-in-law, a chief architect of the long-delayed peace plan, is pressing ahead with arrangements for the Bahrain meeting, where the economic components are expected to be unveiled as the first step in the plan.

Israeli and U.S. officials say Israel has yet to be formally invited, given discussions between Washington and Bahrain over what might be an appropriate makeup of an Israeli delegation.

“The Palestinian Authority urges Egypt and Jordan not to attend the Bahrain conference,” Ibrahim Melhem, a spokesman for the Palestinian government said on Facebook after U.S. officials announced the two nations, along with Morocco, would attend.

Melhem urged “all brotherly and friendly countries to withdraw”, adding that participation “would carry wrong messages about the unity of the Arab position” on rejecting Trump’s plan.

While the precise outlines of the draft plan have yet to be revealed, Palestinian and Arab sources who have been briefed about it say it has jettisoned the two-state solution. The plan faces possible delays due to political upheaval in Israel, where Prime Minister Benjamin Netanyahu must fight another election after failing to form a government.