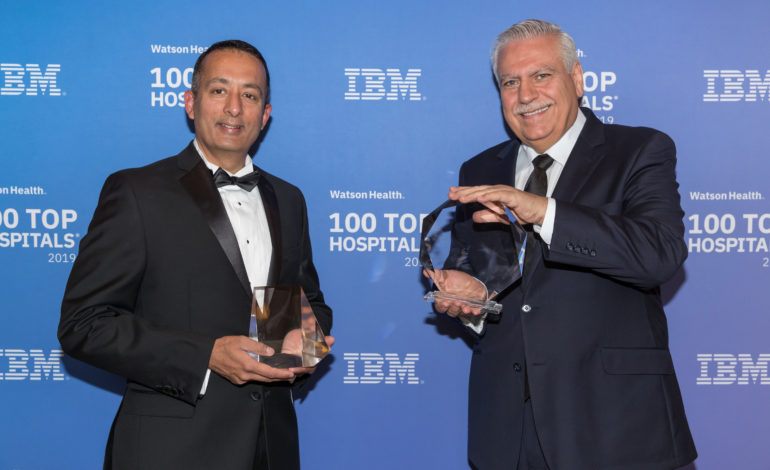 Garden City Hospital CEO Saju George and Chairman of the Board Osama Siblani.

SAN DIEGO, CA — Michigan’s Garden City Hospital received the prestigious Everest Award this past Thursday, June 6, which recognizes an overall improvement over a five-year period and is given to just 13 hospitals nationally.

The hospital, which nearly went bankrupt prior to joining Prime Healthcare in 2014, has staged a dramatic comeback under CEO Saju George and the rest of its leadership team.

“Dr. Prem Reddy and Prime Healthcare laid the foundation for success and with the transformative leadership of Mr. Saju George as its CEO, we transformed to be a vibrant and thriving community hospital,” said Garden City Hospital Board Chairman Osama Siblani, who is also the publisher of The Arab American News. “We are so grateful and proud of everyone involved.”

The hospital had struggled to continue operations prior to Prime Healthcare’s takeover, but has rebounded in a big way. It was also named one of the nation’s top 100 hospitals by IBM Watson Health, an advanced national health technology organization.

Winners of the award, including Garden City Hospital, were able to deliver a balanced scorecard demonstrating exemplary performance on clinical, operational, financial and patient perception measures, including a five-year trend for performance compared to peers.

The annual studies have been shining a spotlight on outstanding achievements of the nation’s leading healthcare organizations since 1993.

Garden City Hospital is the only hospital in Wayne County to earn this distinction in 2019. The hospital has improved its ER “door to discharge” time by 75 percent since 2013.

It has also improved cost-effectiveness and has invested $15 million in technology improvements, upgrades and expansions, with an additional $20 million planned to go towards future growth.

The hospital’s heart program is also being expanded, with a new cardiac catheterization lab being added later this year.

“Garden City Hospital became a part of Prime Healthcare family in 2014, said George, who is also regional CEO for Prime Healthcare. “During this five-year period, our top priority has been improving patient care. We relentlessly focused our efforts on process improvements, clinical outcomes and patient satisfaction while keeping costs competitive for our customers. This truly reflects the entire hospital team’s effort and we are so grateful and proud of everyone involved.”