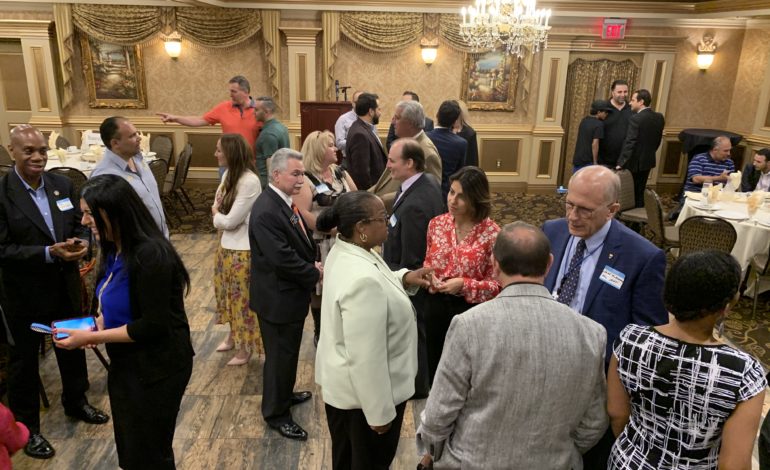 Worthy talks with supporters following her speech at Habib's Cuisine.

DEARBORN — Friends, supporters, well wishers, prominent community members and officials alike turned out by the dozens on Wednesday June 19 at Habib’s Cuisine, supporting one of the most respected prosecutors in the country, Kym Worthy, for her upcoming bid for reelection.

Worthy, who recently joined with Michigan Solicitor General Fadwa Hammoud  as part of Attorney General Dana Nessel’s team in investigating the Flint Water Crisis, was brief in her remarks to a community she has worked closely with and gotten to know on a deep level.

“Thank you so much for your support, it means an awful lot for me and my family,” Worthy said. She thanked the community for embracing her over the years, the same way she has embraced and helped train many of its top up-and-coming leaders.

“You are people I consider my friends, family, confidants, mentors, people I’m glad enough to mentor…Almost everybody this community has brought me has turned into a superstar.”

Osama Siblani, the publisher of The Arab American News, referred to Worthy’s office as the Kym Worthy School, where she has trained many of the state’s brightest prospects from the local Arab American community and other communities.

Among them have been Wayne County Third Circuit Court Judge Mariam Bazzi, Assistant U.S. Attorney Abed Hammoud and Fadwa Hammoud, among others.

Fadwa Hammoud referred to herself as a “proud graduate of the Kym Worthy School” during her speech.

“I’m extremely privileged to keep working by her side and to continue to work with her,” she said.

Hammoud spoke of her earlier days in the Wayne County office with Worthy, during which she relied on the veteran prosecutor for help in challenging and controversial times.

She said that Worthy would often give her guidance and courage during these times to make decisions that may not have always been popular, but ultimately were the right ones.

“Thank you for everything you taught me, thank you for making this part of your home,” she said.

While Worthy is considered an overwhelming favorite for reelection when her term ends in 2020, the funds raised Wednesday evening are still greatly needed, Siblani said.

“People think because Kym is the incumbent, no one dares to run against her,” he said. “She is safe, but that doesn’t mean she shouldn’t be raising money and stocking her treasury.”

Siblani also called her the “most respected prosecutor in the nation and an undisputed, loyal friend.”