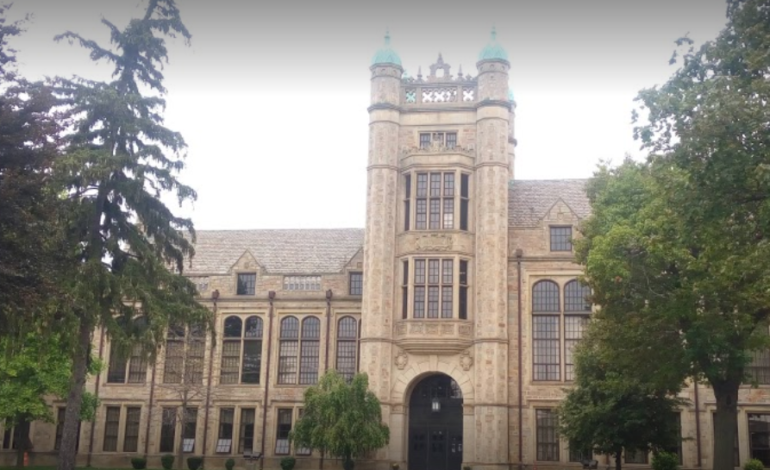 Fordson High School was completed in 1928 and is one of several buildings in need of upgrades. Photo via M. Mushthafa/Google

DEARBORN — Michigan’s third largest school district will seek a $245 million bond approval this year for revamped media centers, new furniture, equipment, technology upgrades and more, in hopes of fixing up some of the most outdated buildings in the state.

A $245 million bond proposal is being sent by board members to state officials this month for approval, which would help cut into an estimated $563 million price tag for needed improvements within the next decade or longer if approved.

“We really have to consider our best opportunities, since we do believe that this is necessary in order for us to continue to support our public schools here,” Board of Education President Mary Petlichkoff said at a meeting last week.

If approved by state officials, the proposal could appear on the November ballot.

Many of the district’s buildings are nearing 100-years-old, officials say.

The proposals include major renovations at Dearborn and Edsel Ford High Schools, and at Lindbergh and McDonald elementary schools, as well as the expansion of the Fordson High gym lobby. Two new buildings would also be purchased from Henry Ford College and special education classroom and support areas would be expanded at Nowlin Elementary and O.L. Smith Middle Schools. More buses would also be acquired district-wide.

According to District Communications Director David Mustonen, the idea came from community forums in the past two years on boundary realignments for the three high schools in the district: Dearborn, Edsel Ford, and Fordson. A task force was created that included residents and staff members from the district, who spent months studying the issue and recommended the upgrades.

The application will be up for a vote at Monday’s school board meeting. According to Superintendent Glenn Maleyko, a meeting with the state treasury department took place in Lansing on Monday, June 17.

When asked whether he feels the upgrades are necessary, Maleyko told The Arab American News that now is a critical time to continue positive momentum in the district.

“Absolutely, the reality is we have such good academic programs going on, (but) the issue is we have a lot of beautiful buildings, almost 10 buildings approaching 100 years old,” Maleyko said.

Maleyko said that budget cuts under the previous administration have led to a situation where upgrades are of special concern.

“Over time, we have to have upkeep,” he said, noting “a lot of budget cuts” that took place from 2008 to 2013 while the late Brian Whiston was superintendent.

“Once it deteriorates, you have to have upkeep…If we didn’t take any action, the infrastructure would suffer long term and we’d be bandaging the areas that need upgrades rather than fixing the issues.”

The administration has been working on bringing the pending improvements to fruition for two and a half years, Maleyko added.

Among the other areas targeted are heating and cooling systems, cafeterias, gymnasiums, classrooms and many other areas.

“When they get older, you’ve got to upgrade them, just like a home,” Maleyko said.

According to Maleyko, the bond proposal is technically not a renewal of the current tax structure, but would work similar to one because it would “serve the purpose of a no mill increase.”

Although many Dearborn community members have expressed concern over high property taxes in combination with other taxes in recent months, Dearborn voters have a strong track record of supporting educationals proposal in recent years.

“We have a strong district because of the community,” he said. “It has always supported education and that’s why our students are doing so well.

“There have been some districts in the state that have let their buildings deteriorate. We don’t want to get to that point down the road, that’s why we’re being proactive with our approach.”