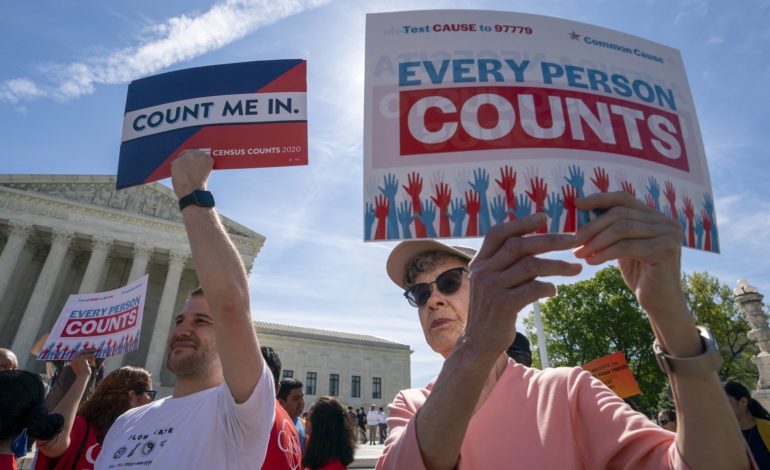 Immigration activists rally outside the Supreme Court in April. -AP

Combatting a predicted major undercounting of people of color in the 2020 U.S. Census was the focus of a national roundtable discussion, featuring key representatives of civil rights and voting rights organizations, earlier this month.

“We are not going to stand by and be undercounted,” said Jeri Green of the Urban Institute, which on June 4 released a study asserting that the upcoming Census is likely to be the least accurate since 1990, or possibly worse, and that among the people likely to be overlooked will be 1.7 million kids younger than age 5. It expects California to have the highest percentage of people not counted, followed by Texas, New Mexico, Nevada, Georgia, New York and Florida.

Part of the concern expressed repeatedly in the national teleconference was the possibility that the 2020 Census will include a question inquiring about a person’s citizenship status. The U.S. Supreme Court is expected to soon issue its decision on whether to allow the question. Three federal courts have ruled against allowing the change to census procedures, but it is widely feared that the Supreme Court may overturn those rulings.

“Tegardless of the outcome of the Supreme Court’s decision, we will not idly stand by as others attempt to undermine the progress of the Latino community and suppress the count of the nation’s second largest population group,” NALEO CEO Arturo Vargas said. “We will continue to fight for a just Census 2020 and a full and accurate count of Latinos and immigrants.”

“But even if it doesn’t get put on the Census, just the discussion of it has already done harm,” John Yang of the AAAJ said.

The harm, Yang explained, is that people who are already skittish about government in general — or their citizenship status — are less likely to fill out any Census form, thinking it might put them at risk.

Steven Choi of the New York Immigration Coalition said that the most effective strategy will be to have as much person-to-person contact with individuals to convince them to fill out the Census because of its importance in determining federal funds and national representation.

In New York, the state Congressional delegation is bracing for a likely loss of two seats.

“And in terms of money and power, for every person lost — or not counted — it’s estimated to cost the state about $3,000 per person,” Choi said.

That’s money lost to all manner of public spending.

This year’s Census will also be the first to extensively use the Internet and online data gathering, in favor of deploying the traditional door-to-door Census takers.  The Census Bureau is planning to send out an electronic request to 80 percent of U.S. households, expecting a response rate of about 45 percent. Non-responsive households will eventually be mailed a paper Census form to fill out, either in English or Spanish. Online questionnaires will have more languages to choose from.

Eventually, if no response is forthcoming, a Census Bureau field worker will be dispatched to contact the household in person or via telephone.

The consensus among the teleconference panelists was that if the citizenship question is included in the Census, people should answer it and not leave it blank.

“You really must answer,” Choi said. “There are legal ramifications.”

Panel moderator Beth Lynk, Census counts campaign director for the Leadership Conference on Civil and Human Rights, said her organization is worried about an undercount of as high as 4 million minorities with a possible concomitant over count of Caucasians.

“Everyone relies on Census data,” she said.

Sulma Arias of FIRM said her organization is already holding community meetings, engaging people of color online and getting the word out about how important this Census will be.

“This is an attack on our rights to fair representation,” she said. “We refuse to be erased.”