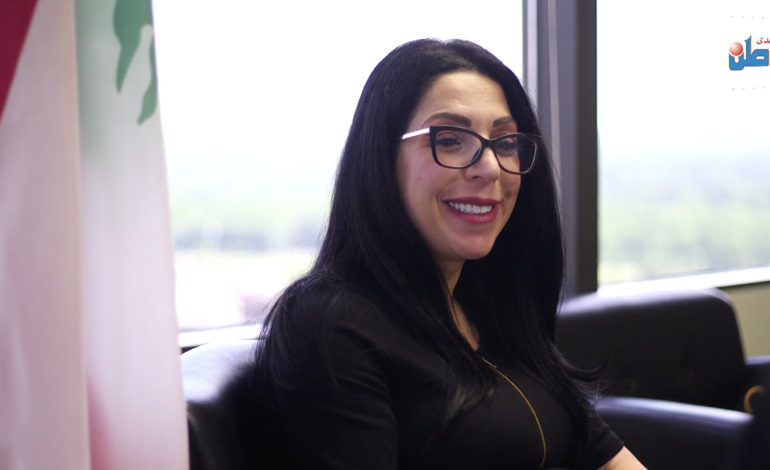 SOUTHFIELD – The Lebanese Consulate in Detroit is an active and contributing member in the community, with Suzan Mouzi-Yassine as its consul general and the head of the mission. In an interview with The Arab American News, Mouzi-Yassine explained the various services the Consulate offers to the large Lebanese American community in the region.

Mouzi-Yassine was the first woman to hold a high diplomatic post that oversees the service of the Lebanese community in Michigan and 13 other states in the Midwest. She started her role with the mission at the Southfield (North Detroit) headquarters.

Mouzi-Yassine praised the work of her team, which serves one of the the largest expatriate Lebanese communities in USA.

She stressed that the work of the Consulate expands from consular and legal services to organizing cultural and social activities in the community in order to promote the cultural identity of expatriates and enhance ties between the community and the motherland.

The consul was keen to take advantage of the spaciousness of the offices of the Consulate General to make it a center for dialogues, lectures, symposiums and workshops, the latest of which was a special exhibition on the history of Lebanese and Arab American media and literature.

“I took short missions abroad, notably Iran and Poland, before I was appointed first secretary and deputy head of mission at the Lebanese Embassy in The Hague, [a city in Netherlands]” she said.

“I then was appointed as Charge d’Affairs at at the Lebanese Embassy in Bulgaria for a period of three years until my current appointment as the consul general of Lebanon in the Midwest States,” she added.

On balancing between family duties and her diplomatic career, Mouzi-Yassine stated that the nature of diplomatic work poses “unusual challenges for women, especially if they combine motherhood, child-rearing and employment.”

She stated that permanent mobility affects the stability of the family but enriches the personality of the child and develops their social abilities, as well as the ability to adapt to different circumstances and in being more open to different cultures.

“I therefore consider permanent mobility a positive rather than a negative aspect of my job,” she said.

“Although currently pregnant, it never affected my job or social activities,” Mouzi-Yassine said. “Permanent mobility keeps your mind awake and in constant interaction with the renewed environment.”

She added that acquiring knowledge, skills, experiences and accumulated diverse friendships from different cultures  is a great win for her and her family.

When asked about the role of the Consulate in helping Lebanese expatriates in contributing to the homeland from abroad and presenting a civilized image to the world, Mouzi-Yassine said that the Lebanese mentality is “resilient, adaptive and ambitious.”

“If I were to speak with sincerity and honesty about the people in the community, I’d say that they are a great and active community with remarkable potentials, filled with ambition and determination and Lebanon is proud of their accomplishments and representation abroad,” she said.

“These successes have a fundamental function in the service of Lebanon and I hope that these energies will be joined to form a lobby serving the community interests on one side and strengthening Lebanese-American relations on the other side,” she added.

About the amount of money sent annually to Lebanon from the large number of expatriates, the World Bank estimated remittances at 14.5 percent of Lebanon’s GDP [$8 billion a year].
On that, Mouzi-Yassine said that the role of the Lebanese expatriate is broader and more comprehensive.

“In a just and fair approach, the expatriate is the messenger of the homeland abroad, and an extension of its culture and civilization,” she said. “Every success of Lebanese expatriate is a success for the homeland and an added value to its reputation. Expatriates are Lebanon’s human and material capital, who can also play an important role in supporting national economy and in the politics of the country. For example, their participation in the elections allow them to express their choices on the level of decision-making.

“The diplomatic mission is not considered a functional unit whose role is limited to the completion of formalities and technical matters, but extends to the care of the expatriates, to address their problems, to embrace them and encourage them to unite in the name of the country, to reinforce ties with the homeland, in addition to establishing a partnership with them that aims to promote the best image of our country and community,” she added.

“We always call on the community to be united and bonded to the homeland, participating in its public affairs and decision-making. We also call on them to integrate actively in the host country. I have also an additional personal hope, to give the young generation all the attention they deserve and we do count on them as a promising future for our community.”