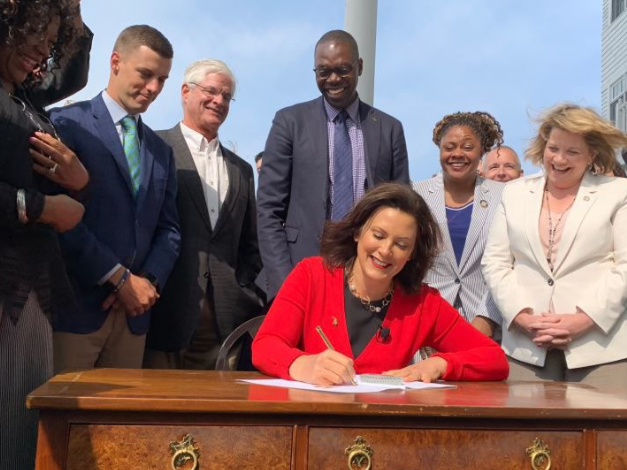 File photo of a bill signing via Gov. Whitmer's office.

LANSING — Governor Whitmer signed multiple noteworthy House and Senate bills on Tuesday, including one amending the requirements for the levels of a graduated license and another regulating unmanned aircraft systems in certain circumstances.

Senate Bill 192 amends the Michigan Vehicle Code to specify that an individual who has a restricted driver’s license that permits daylight driving only need not complete the nighttime driving hours requirement for the issuance of a Level 2 graduated license.

Senate Bill 193 amends the Driver Education Provider and Instructor Act to specify that the nighttime driving hours requirement for a student’s admission into a Segment 2 curriculum course would not apply to a person who had been issued a restricted driver license that permits daylight driving only.

In addition, Whitmer signed Senate Bill 129, which modifies the Michigan Unmanned Aircraft System Act to permit the operation of drones on Mackinac Island (and other political subdivisions that ban motor vehicles) as long as the operator does not intentionally interfere with the commercial use of horses and horse operations.

Another bill, House Bill 4118, was also signed, amending the basic speed law to set a 25-mph speed limit within all land zoned residential and in all local street systems, unless another speed limit is posted.