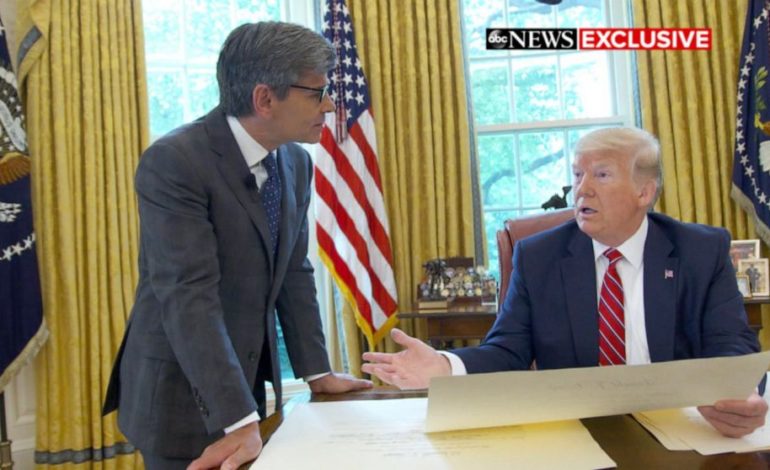 In a June 12 interview with George Stephanopoulos of ABC News, President Trump freely admitted that he would listen to foreigners offering him “dirt” on his political opponents.

“I think you might want to listen,” Trump said. “There isn’t anything wrong with listening …. Somebody comes up and says, ‘hey, I have information on your opponent.’ Do you call the FBI?”

Unsurprisingly, critics from both major parties pounced on Trump’s statement, condemning it on grounds of morality, patriotism, and law. Equally unsurprisingly, those critics are wrong in (at least) their first two reasons. Some are also hypocrites who should stop clutching their pearls for long enough to wash the “dirt” off them.

In 2015, the Washington Free Beacon, a (then anti-Trump) Republican newspaper, hired a company called Fusion GPS to conduct opposition research on several Republican presidential primary candidates, including Trump. Once it became clear that Trump would be the GOP’s nominee, that project ended.

Also in 2016, three members of Trump’s campaign — Donald Trump Jr., Jared Kushner and Paul Manafort — met with a Russian lawyer, Natalia Veselnitskaya, in hopes of getting “dirt” on Clinton.

Every serious political campaign conducts opposition research and views the information it gathers with two questions in mind:

First, is the information true (or at least plausible)?

Second, is the information useful?

Where or from whom the information comes from is only relevant in light of those two questions.

And that’s exactly how it SHOULD work.

Campaign opposition research is a primary source of public knowledge about the candidates who are seeking our votes.

If that information is true, it’s true whether it originated in Minneapolis or in Moscow.

If that true information is pertinent to our voting decisions, it’s neither moral nor patriotic to ignore or denounce it solely on the basis of where it came from.

With respect to the law, the Trump Tower meeting mentioned above was extensively (and expensively) investigated by the U.S. Department of Justice. After two years of probing alleged Russian interference in the 2016 presidential election, Special Counsel Robert Mueller reported that his investigation “did not establish that members of the Trump campaign conspired or coordinated with the Russian government in its election interference activities.”

While Trump still faces congressional investigations on the question of whether he committed crimes by obstructing Mueller’s investigation, and while DOJ is now inquiring as to possible misuse of the “Steele dossier” to justify the FBI’s spy operation on his campaign, he’s been exonerated on the matter of seeking foreign “dirt.” And it’s unlikely that the DNC or the Clinton campaign will be found legally culpable for their use of foreign information sources, either.

That, again, is as it should be.