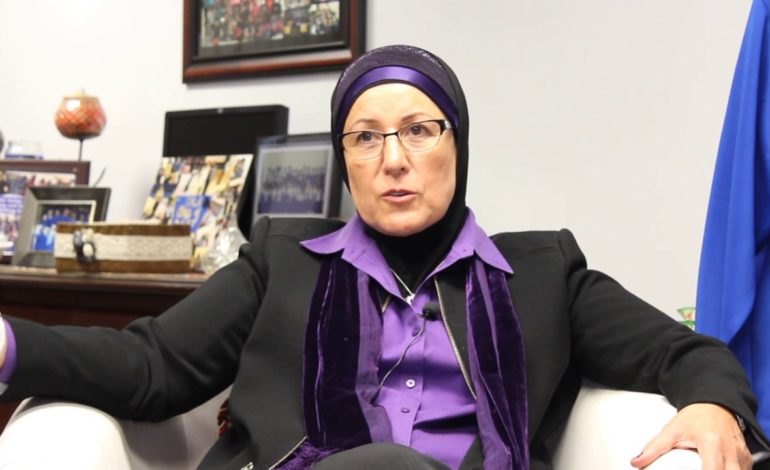 Nawal Hamadeh, founder and director of the Hamadeh Educational Services

DEARBORN – In a conversation with The Arab American News, Nawal Hamadeh, founder and director of the Hamadeh Educational Services, discussed the incident that took place at the Universal Academy [one of the charter schools operated by Hamadeh Educational Services] graduation ceremony, which turned into a public issue after the release of a video sparked a widespread debate.

The video featured two graduating students who expressed their discontent with the school’s administration and teachers.

“The ceremony was based on the results of academically excelling students,” Hamadeh said. “We have 52 students, of whom 44 have received scholarships worth over $18 million, which means that nearly 86 percent of the students received high-level scholarships. Our high schools are among the top 15 in the state of Michigan, which has about 674 high schools, according to the Mackinac Center for Public Policy report, and our students have a clear presence in the Yemeni, Iraqi, Lebanese and other communities. Our students are educated to build a strong personality and to express their opinions and how to plan for their future.”

The two students who gave a speech came in second place when the academic results were announced, Hamadeh said. Per the school’s rules, the first and second place holders in their graduating class usually give a speech.

“We know that a graduation commencement is an opportune platform for students to make remarks and memories among their fellow peers and the administration,” she said. “However, the speech that the two students gave did not match the draft they submitted and got approval for prior to the ceremony. This was unfortunate and disturbing.

She added that the controversial speeches has unfortunately, “distorted the memories of many parents who were very proud to see their children graduating, especially those who excelled. The incident is now under investigation by our lawyers.”

She also said that Hamadeh Educational Services educates students within the context of their smaller and larger communities:

“The small community of mother and father and the large community that includes the neighborhood, the city, as well as environmental education related to air, water and natural energies to ensure a better life for us and for all future generations,” Hamadeh said.

“We establish our students on these principles and expect them to submit their speech and abide by them,” she added. “…More details are now privileged information that are being handled by our lawyers.

“Unfortunately the misunderstanding did not conform to the academic standards of the secondary school, although the percentage of excellence was very high…this is an indication of the fatigue and work we do in charter schools.”

Hamadeh has four schools in Dearborn Heights, Detroit, Westland and Sterling Heights. She began her career in history and political science as part of an academic track to law at the University of Detroit Mercy, where she received her bachelor’s degree in 1974.

But instead of enrolling in law school, Hamadeh received a master’s degree in secondary education leadership in history and social sciences from Eastern Michigan University in 1993. She then began practicing teaching in private schools, where she discovered that despite the quality of private education, its high costs stand in the way of the aspirations of modest families.

At the same time, Hamadeh felt that the public education system “does not meet the needs of many families.” She found that charter schools, a concept that began in Michigan in the mid-1990s, are the “best way to combine the benefits of public and private education,” she said.

“I saw it as a compromise between private and traditional education, making it perfectly suitable for the community,” she said. “So I decided to leave the field of private education.”

Hamadeh obtained her license to start her own chain of charter schools in 1998.

Although the initial plan was to set up a small school for an estimated 125 students, the turnout was heavy; so she decided to open more.

“All I wanted to do was just educate the children and make a difference in their lives, but we received more than 625 registration requests,” she said. ” …It was beyond our absorptive capacity and it was very sad that we had to deprive parents of the opportunity to register their children, so we worked to accommodate as many students as possible.

“Like any other profession, my team of administrators and teachers and I face daily challenges,” she aded. “But what makes all the hard work worth the effort is the success of the students and the gratitude they show for their school and their teachers.”