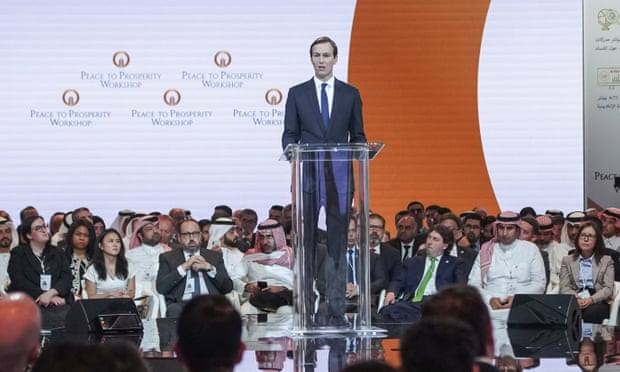 Jared Kushner speaks at the Peace to Prosperity Workshop in Manama. Photo by Associated Press

MANAMA – The so called “deal of the century” proposed by President Trump’s senior adviser and son-in-law Jared Kushner, which sought to deal with the Palestinian-Israeli conflict, was met with minimal interest from the attending crowd.

With the Palestinians absent from the conference table, in addition to the refusal of many Arab states to join the conference, the United States’ effort to build a bridge for a “prosperous future” for Israel and occupied Palestine seemed to have only yielded a normalization of relationships between the Gulf countries and Israel.

Among the Arab countries, Saudi Arabia, the United Arab Emirates and Qatar have all reportedly signed up to attend the conference, while U.S. officials announced that Egypt, Jordan and Morocco also participated. Kuwait and Oman did not attend.

It was of no surprise that other Middle Eastern countries like Lebanon, Iraq and Kuwait did not attend. Lebanon and Kuwait have a history of refusing any association with Israel.

Meanwhile, Israeli Prime Minister Benjamin Netanyahu announced well before the event that Israel was sending a delegation to the conference.

Additionally, the U.S. pledged $50 billion as a start-up fund for the region’s Palestinians; a plan that was shot down by Jordan, Egypt and Lebanon. Beirut dismissed the pitch and referred to it as a “shameless bribe.”

Dr. Joshua Teitelbaum of Bar-Ilan University’s Middle Eastern Studies Department, and an expert on the Persian Gulf, told the Jerusalem Post that the conference was held in Bahrain because “the Saudis told the Bahranis to do so.”

Bahrain, Teitelbaum said, is the “easiest” pick out the Gulf countries to host the conference because it “competes with the UAE for closest under-the-radar relations with Israel” and since neither Qatar nor Kuwait would host something like this gathering.

The Palestinians, the subject of the party, although absent from it, have opted out of the conference and called on other Arab countries, specifically Egypt, Morocco and Jordan to boycott it.

It is no surprise that leaked excerpts of the deal show it heavily favoring Israel, while failing to genuinely address Palestinian aspirations for statehood.

Kamel Hawwash, a U.K.-based Palestinian university professor and analyst, stated that the U.S. decision to push ahead with the conference, despite Palestinian non-attendance, “highlights its true goals.”

Palestinian leaders boycotted the workshop because of the current U.S. administration’s overwhelming supportive of the Israeli agenda and its open dismissal of the Palestinians.

“Frankly, we demand an independent Palestinian state on the territories occupied by Israel in 1967,” Ashraf Jabari, chair of the Palestinian Business Network, told The Guardian.

Hanan Ashrawi, a senior member of the Palestine Liberation Organization, said of Kushner’s plan, “It is totally divorced from reality. The elephant in the room is the occupation itself.”

The Palestinian position ahead of the conference was left weak after the U.S. decided to withdraw humanitarian aid funding, shutter its missions in the West Bank and Gaza and kick out its diplomats from Washington. This will affect the Palestinian territories’ economy and political structures.

With Kushner’s plan revealed in the Manama conference, the Trump administration’s stance on the Palestinian-Israeli conflict has been revealed and leaves more room for imagination for how its future plans will flow for the Palestinians.