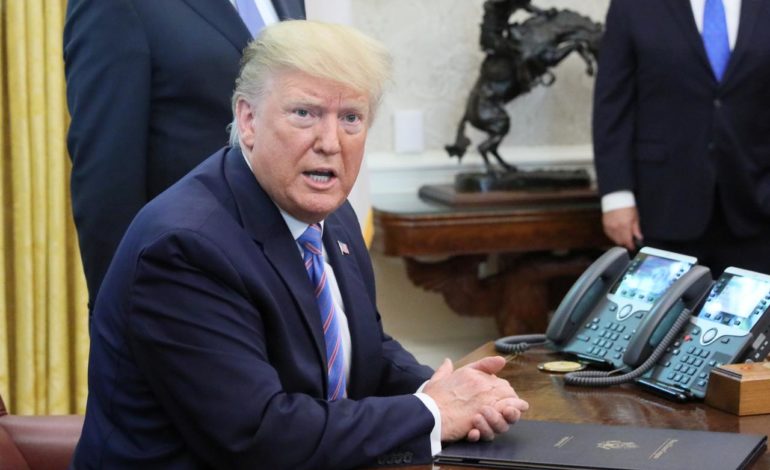 Trump speaks at the Oval Office on July 1. Photo via Reuters/Jonathan Ernst

WASHINGTON, D.C. — President Trump announced his intention to move forward with a plan to add a controversial citizenship question to the 2020 U.S. Census on Wednesday, a dramatic reversal just a day after Commerce Secretary Wilbur Ross announced the plan had been scrapped.

“The News Reports about the Department of Commerce dropping its quest to put the Citizenship Question on the Census is incorrect or, to state it differently, FAKE! We are absolutely moving forward, as we must, because of the importance of the answer to this question,” Trump wrote on Twitter.

A senior U.S. Justice Department lawyer told a Maryland-based federal judge overseeing litigation in the matter that the administration was seeking a “path forward” to add the question, after the Supreme Court blocked it last Thursday, at least temporarily.

It was found by the Supreme Court that a “contrived” rationale was used for attempting to for include the question, but the door remains open for the administration to offer a more plausible plan, Reuters reported.

Officials are reportedly seeking approval in a new lower court decision, a person familiar with the administration said.

Judge George Hazel, an Obama appointee who is currently overseeing the federal lawsuit over the citizenship question in Maryland, gave the Trump administration until 2 p.m. Friday to say that it will no longer pursue adding the question to the Census. If not, he asked for a proposed schedule on how he should move forward on reviewing equal protection claims in relation to the question’s possible addition.

Ross said Tuesday that Census forms are currently in the process of being printed without the question included.

Critics have called the plans to include the citizenship question a Republican ploy to scare immigrants into not participating in the Census, which would negatively impact Democratic voter bases.

Trump also added last Thursday that he was exploring whether the Census can be delayed. It is required to be carried out every 10 years by the Constitution.

“We at the Department of Justice have been instructed to examine whether there is a path forward consistent with the Supreme Court decision that would allow us to include the citizenship question on the Census,” Assistant Attorney General Joseph Hunt U.S. District Court Judge George Hazel of Maryland on Wednesday, according to a court transcript obtained by Reuters.

“Another day, another attempt to sow chaos and confusion,” New York’s Democratic Attorney General Letitia James, who is involved in the legal challenge, said. “The Supreme Court of the United States has spoken, and Trump’s own Commerce Department has spoken. It’s time to move forward to ensure every person in the country is counted.”

The ACLU, which was part of the Supreme Court lawsuit, said any new rationale would not pass legally.

“Any attempt at an end run around the Supreme Court’s decision will be unsuccessful, and will be met swiftly in court,” Dale Ho, director of the ACLU’s Voting Rights Project, said in a statement.