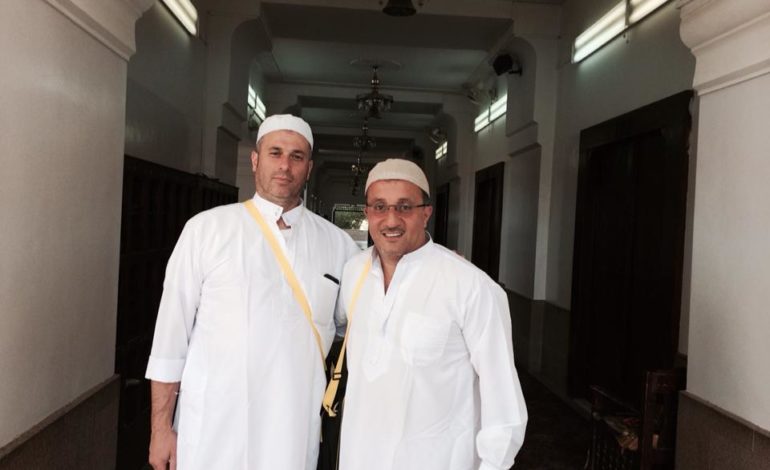 Dave Abdallah with Hassan Osseily in Mecca during their trip to the Hajj, September 2014. -Photo courtesy of Dave Abdallah

DEARBORN – The Muslim holy pilgrimage Hajj, one of the five pillars of Islam, is expected to begin on Friday, August 9 and end on Wednesday, August 14, with millions planning to embark on this year’s journey.

During Hajj the city of Mecca becomes one of the most densely-populated locations on Earth, as hundreds of thousands of people come together to circle the Kaaba, considered by Muslims to be the house of God in the center of the Grand Mosque, and to perform various other rituals and prayers.

Completing the Hajj is expected from every able-bodied Muslim who can afford the trip during their lifetime, but the pilgrimage can be a difficult one, especially considering the logistics and uncertainties involved for those who have never been.

For Dearborn Heights City Councilman Dave Abdallah, who first went in 2007 and again went in 2014, the journey was an unforgettable one.

“In my case I went in my early 40s, which is earlier than a lot of people typically go,”  Abdallah said, adding that it was a highly emotional experience. “It was draining, emotionally very difficult; I cried a lot, but I enjoyed it a lot.”

The Hajj was also a bonding experience for Abdallah. Dave Abdallah in Mecca during his trip to Hajj in September 2014. -Photo courtesy of Dave Abdallah

The Hajj is a bonding experience. The people you go with become your brothers and sisters for real, it’s not just a figure of speech. – Dave Abdallah, went to Hajj at 40

“The people you go with become brothers and sisters for real, it’s not just a figure of speech,” he said. “You go with them for a whole month together, experiencing something very emotional and develop a really strong bond that to this day. If I see any one of them I hug them like I’m hugging my brother.”

According to Abdallah, the trip is a “little bit physically demanding”, but can be done by those in decent shape.

“I wouldn’t say you need to be in excellent shape, but it sure doesn’t hurt being in good shape,” he said. “I highly recommend people start walking or running or exercising as much as they can; there will be a lot of walking during the Hajj.”

Abdallah also recommends taking lots of clothes because of the sheer length of the trip for many people. Simple basics like t-shirts and jeans are a good choice, as many clothes are thrown out after use. Slippers for relaxing and rugged shoes that are useful for walking are also useful items to bring, he added.

“Take medicine, for sure medicine,” Abdallah added. “Medicine from the United States is much better quality than you’ll buy in any other countries.”

According to the website IslamiCity.com, booking with a travel agent is a safe bet for ensuring a safe trip and a full Hajj experience. Several agencies in Dearborn and surrounding areas offer Hajj trip packages. According to the Manara Travel Agency of Dearborn, packages may be booked up until August 1, as long as there is still availability.

Vaccinations are also required for the trip according to the World Health Organization; more information can be found by speaking to a doctor.

While some difficulties are to be expected, Abdallah said he enjoyed the trip to its fullest.

“The Hajj trip is one of the most beautiful trips I’ve ever taken in my entire life,” he said, referencing the spiritual aspect of it as his favorite part.

Rehab Amer of Dearborn, the founder of the American Muslim Empowerment Resources non-profit, also went in 2007 and said that the trip is something that must be experienced to be believed.

“I can’t even describe the feeling,” she said. “As much as you are prepared, when you get there you’re somewhere peaceful. The harmony, the purity, the spirits, the souls, everything; it’s out-of-this-world. Muslim pilgrims arriving at a Saudi Arabian airport on their way to Mecca.

While it’s important to be prepared from a logistical standpoint, Amer said that it’s more of a spiritual experience than anything else.

Amer climbed Mount Jabal an-Nour during her trip, a holy site for Muslims where the Prophet Muhammad spent a great deal of time meditating and was said to have received his first revelation.

Despite warnings of a lengthy climbing time, Amer took less than an hour to complete the climb, fueled by the energy of fellow travelers and moved by the enormity of the moment.

“It was a beautiful feeling,” she said. “I wish I would be able to go there a second time.. I would love to go back.” Rehab Amer (second from left) on her 2007 Hajj trip with the Bab Al-Rayan Group of Dearborn.

I advise those who want to go to the Hajj to be patient and to accept things as they come and even if there’s hardship, to remember what they’re there for. With that comes ease. – Rehab Amer, went to Hajj in 2007

As far as difficulties go, Amer said the experience was mostly a pleasant one, although there were many smokers over the course of the journey. She brought antibiotics for a throat infection during the trip.

Amer cautioned travelers to walk carefully to avoid being injured in the unlikely event of a fall during the circling of the Kaaba, during which crowds become large.

As a side note, Amer, who went with a group of Shi’a Muslim pilgrims through the Bab Al-Rayan Hajj Group of Dearborn, did not notice much difference between adherents of Sunni and Shi’a Islam, aside from a few religious rituals and customs.

Saudi Arabia has been roundly criticized for its harsh treatment of Shi’a protesters and dissidents in recent years.

Above all, the Hajj will test the patience of travelers more than anything else, Amer said.

“The Hajj needs to have a lot of patience,” she said. “I would really advise those who want to go to be patient and to accept things as they come, and even if there’s hardship, to remember what they’re there for. With that comes ease.”

EID AL-ADHA AT THE END OF THE HAJJ

What is Eid al-Adha?:

Eid al-Adha, is the “feast of the sacrifice.” It commemorates the end of the Hajj, an annual pilgrimage by millions of Muslims to the holy city of Mecca in Saudi Arabia that is obligatory once in a lifetime, but only for those with means.
Eid al-Adha recalls the story of how God commanded Ibrahim to sacrifice his son Ismail as a test of faith (the story is of Abraham and Isaac in the Hebrew Torah and Christian Old Testament). The story, as narrated in the Quran, describes Satan’s attempt to tempt Ibrahim so he would disobey God’s command. Ibrahim, however, remains unmoved and informs Ismail, who is willing to be sacrificed.
But, just as Ibrahim attempts to kill his son, God intervenes and a ram is sacrificed in place of Ismail. This story has institutionalized the ideal of sacrifice in Islam and continues to be commemorated each year. During Eid al-Adha, Muslims slaughter an animal to remember Ibrahim’s sacrifice and remind themselves of the need to submit to the will of God. Eid al-Adha is also known as the “Greater Bayram.”

When is it celebrated?

What customs are common during the Eid al-Adha‭?‬

What is the spiritual meaning of sacrifice during Eid al-Adha‭?‬

What are some of the modern-day challenges‭?‬