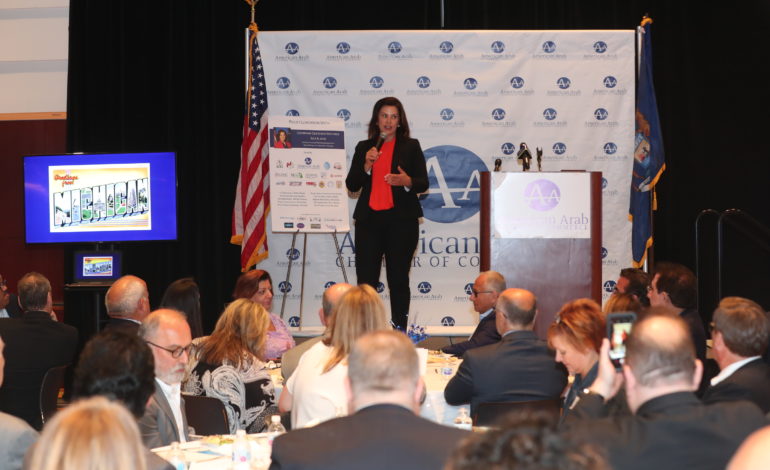 DEARBORN – Governor Whitmer was in Dearborn this week for an expanded presentation of her 2020 budget proposal.

To little surprise, infrastructure spending was a focus of her talk at the Ford Community and Performing Arts Center. She later sat down with The Arab American News for an exclusive interview about the budget and the importance of Dearborn as a venue to discuss the need for comprehensive infrastructure and education reform.

The luncheon was hosted by the American Arab Chamber of Commerce (AACC). Officials from Wayne County, Dearborn and Dearborn Heights and community members were all present to hear the governor, who has been busy pitching her budget proposal across the state.

AACC Executive Director Fay Beydoun introduced Whitmer before her presentation, which included images and letters that spoke to the express demands by Michiganders fed up with crumbling roads and a vexed educational system.

She said the people in attendance must know better than anyone that Michigan has historically been a place to come to find opportunity.

She said that despite Republican rule over the state’s legislature, good results can be produced concerning economic revitalization.

On a recent trip across the state for Reading Month in March, Whitmer had an opportunity to talk to families about their needs. Highest on the list was clean drinking water, fixing roads and increasing the educational budget.

She stated that systematic disinvestment in the state for the last 40 years had led to crumbling roads and infrastructure. The state took money from the its general fund to triage crumbling roads, which meant shoring it up in 20 years by taking money out of school aid.

“A shell game has been played in Lansing, taking money from the general fund to fix pot holes and balancing it on the backs of our children,” she said.

She concluded her talk by reasoning why a tax at the gas pump was an honest and potentially effective way out of the state’s infrastructure mess.

“The solution I put on the table was a gas tax,” she said. “Such a tax is constitutionally protected when you’re paying for the roads at the pump, so that every dime goes to fixing the problems.”

She explained that with a gas tax, the general fund can be maintained in order to invest in higher education and closing the skills gap.

So far, the State Senate has opted out of the 45¢ gas tax increase and the both chambers have yet to unveil a long-term road funding plan. The budget must be completed by October 1. The legislature is currently on summer recess.

Whitmer told The Arab American News that Dearborn was an apt and important venue to discuss her proposed budget.

“I love coming to Dearborn,” she said. “I think there’s such a rich diversity of people and experience here that it truly is a gem for our state.

“No other state has something quite like Dearborn. When I get around the state and talk about fundamental issues I find that fundamentals are the same, whether you’re in Grand Rapids or in Dearborn.”

It also has a proposed $56 million road fund for Wayne County roads such as Eight Mile and Ecorse Ave.

“Dearborn is also important in other ways,” she said. “As I’ve highlighted before, the Miller Road bridge outside the Rouge Factory is such a vivid example of how not investing in these fundamentals can threaten our economy and our lives.”

A photo shown in her presentation depicted a school bus driving over the crumbling bridge, a stark reminder of the potential cost of deteriorating infrastructure.

“I believe philosophically and literally that we need to build bridges,” Whitmer said, speaking on the need for consensus and bipartisanship. “We are about 189 days into this year and the legislature has only been in session for 42 days.

“I’ve put a thoughtful solution on the table and they have not put any alternative out. These are serious problems we have to address. Not addressing them makes them more expensive and more dangerous. This is why the people have asked their legislature to get back to work and get their job done.”

Whitmer has repeatedly said that she is willing to work with anyone who has a solid and sustainable plan to get the added $2.5 billion in new annual revenue to get roads in good or fair condition, clean up drinking water and close the skills gap.

She said she believed supporting Dearborn area schools was a sure fire way to ensure growth and opportunity in the area. Her administration has also supported the community through several Arab American appointments including Residence Manager Renee Farhat and Talent and Economic Development Department Senior Advisor Fayrouz Saad.