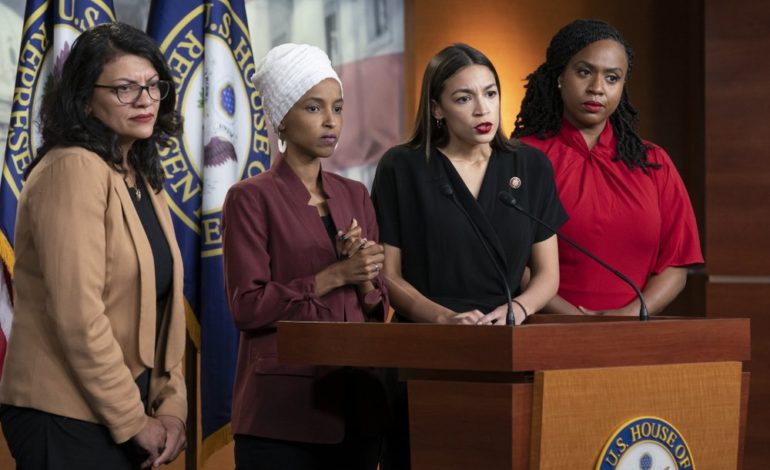 U.S. Reps. Rashida Tlaib (D-Detroit), Ilhan Omar (D-MN), Alexandria Ocasio-Cortez (D-NY), and Ayanna Pressley (D-MA), respond to remarks by President Trump after his call for the four congresswomen to go back to their "broken" countries, during a news conference at the Capitol in Washington. Photo credit: AP

The four have been openly critical of the administration’s border policy and have been some of the most vocal in having a no tolerance policy against mass incarceration and family separation at the border.

The freshmen legislators also found contention with the Democratic leadership earlier this month, and butt heads with fellow Democrats after the party accepted Senate’s supplemental funding bill for detention facilities and the border.

Trump’s comments about the congresswomen have now dominated the conversation in Washington, with Democrats voting on a partisan resolution condemning the president’s racist comments directed at Members of Congress. The nearly unanimous opposition to the resolution by Republicans ensures that Trump’s conservative base will remain intact despite the public condemnation of his comments.

The drama began Sunday when Trump took to Twitter to malign four congresswomen for criticizing his administration. Tlaib, Pressley and Occaio-Cortez all visited detention facilities recently and gave emotionally wrenching testimony of border conditions in front of a House Oversight and Reform Committee. Republicans have denied that conditions in the overcrowded facilities are as bad as the testimonies detailed, and have also called the congresswomen’s visits publicity stunts.

Trump said that “”Progressive” Democrat Congresswomen” came from countries with failing governments and that they should return to those countries to fix problems there instead of criticizing policies at home.

“Why don’t they go back and help fix the totally broken and crime infested places from which they came,” he tweeted. “Then come back and show us how it is done. These places need your help badly, you can’t leave fast enough. I’m sure that Nancy Pelosi would be very happy to quickly work out free travel arrangements!”

The four congresswomen took to the podium at the Capital in Washington to respond to the President’s comments.

“As we all know, the recent tweets and words from the president are simply a continuation of his racist and xenophobic playbook,” Tlaib said. “We cannot allow these hateful actions by the president from the critical work to hold this administration accountable to the inhumane conditions at the border that is separating children from their loved ones and caging them up in illegal, horrific conditions.

“I represent the third poorest congressional district in this country, one that is made of working people who have been targeted by this administration and their actions and words are hurting them today,” she added.

Tlaib also called for an impeachment inquiry into the administration and the president’s appointees.

“Sadly, this is not the first, nor will it be the last time we hear disgusting and bigoted language from the president,” she said. “We know this is who he is and we know that he and his administration are constantly engaged in actions that harm residents and American people in our country.”

Trump fired back on Monday, going as far as calling congresswomen supporters of Al-Qaeda.

“They are anti-Israel, pro Al-Qaeda, and comment on the 9/11 attack, “some people did something,”” he tweeted. “Radical Left Democrats want Open Borders, which means drugs, crime, human trafficking, and much more.”

At an event at the White House, he told reporters Omar had talked fondly of the group in the past.

Trump was referring to a 2013 interview with the congresswoman in which she told of a professor who would change his body language when referring to the group and used a menacing tone. She was making the point that the professor was subtly rousing suspicions of Muslims with his theatrics.

The president later said he did not have a “racist bone” in his body.

Many have condemned the president’s attacks against the congresswomen. AP reports that in West Bank, where Tlaib has relatives but is not her childhood home, a spokesperson for the Palestinian Authority said Trump’s statement was an insult to the office of the presidency.

In a floor speech, House Speaker Nancy Pelosi of California called the president’s tweets racist. Republicans unsuccessfully tried to have her words stricken from the record.

On Tuesday, Congresswoman Debbie Dingell (D-MI) issued a statement after the House voted on the resolution (cosponsored by Dingell) condemning the President’s tweets:

“Fear and hatred have no place in the United States,” she said. “The President should be leading, not dividing us with hatred and fear.

“Throughout the course of our country’s history, language that is xenophobic, racist, sexist, intolerant, prejudiced, or discriminatory has divided and pitted us against each other. In my own community of Dearborn, friends and neighbors face this everyday just because of their religion. We need to remember who we are as Americans. Divided we fall, united we stand.” she added.