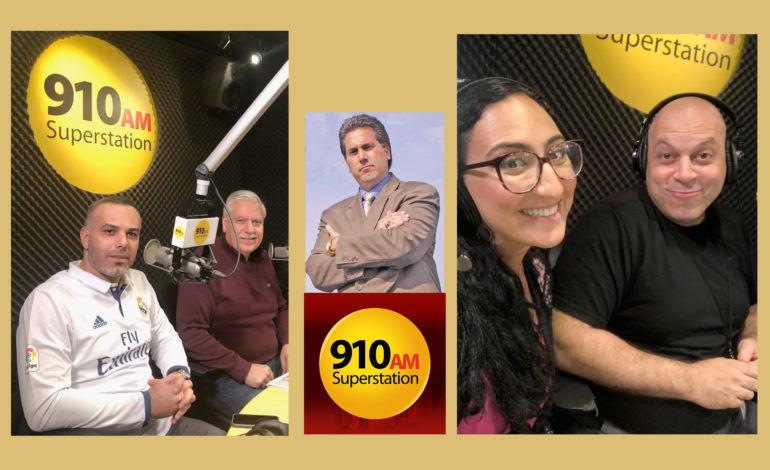 SOUTHFIELD — The Arab American story is an integral part of local history, but dialogue about the culture, politics, successes and challenges within the community has mostly been relegated to the pages of newspapers — until recently.

In an effort to foster more dialogue and understanding among cultures, the Southfield-based 910 AM Superstation has flipped the script, offering two major Arab American radio programs in recent months: “The Arab American News” with newspaper publisher and host Osama Siblani and “The Civil Arab” with host Amer Zahr, a local comedian, writer, speaker and adjunct professor at the University of Detroit Mercy’s School of Law.

“We wanted to reach all audiences; we felt the Arabic community wasn’t being served and we wanted to make sure they have access,” said Kevin Adell, owner of the station, which prides itself on giving a platform to the “most important voices of the urban community.”

“That’s why Amer’s on and Osama is on, to be able to reach (that) audience,” he said “…We’re glad people are listening to the station. We’re doing very well in the Nielsen ratings and people are starting to recognize the logo around town.” Siblani’s show, which airs at 8 p.m. on Saturdays, has featured guests from many different walks of life, including doctors, lawyers, judges and civil rights advocates.

“The goal of my show is to bring out the Arab American community issues and to bring the community to 910 AM to be a part of the station,” Siblani said.

“The Civil Arab”, which bears the namesake of Amer’s longtime blog on issues involving the Arab community locally, nationally and internationally, first began airing in February and runs from 9 a.m.-11 a.m., Monday-Friday, both on the radio and on Facebook livestream.

While the show’s topics are generally serious, Zahr and his co-host Zahra Huber, who worked for more than 10 years as a reporter with WWJ 95o AM, are able to inject humor into the show as well. Both have also worked for The Arab American News in the past.

“I’ve been using the name Civil Arab for my blog for 10 years,” Zahr said. “It’s a sarcastic take on the stereotype of Arabs as loud, angry and ‘uncivil.’

“So I’m ‘The Civil Arab’, though sometimes I get a little worked up, too.”

As host, Amer is able to seamlessly approach topics from multiple perspectives while keeping the mood constructive, informative and entertaining.

“My comedy centers around current events, news, politics, race and society,” he said. “So I’ve been melding these things for some time with my comedy. Comedy is, at its core, a form of protest. So comedians speak the unvarnished truth, sometimes even uncomfortable truths. We point out hypocrisy and ridiculousness in culture and society. Comedy serves as a great tool for a cultural critic. When you can make someone laugh, they listen.”

Huber was brought onto the show as co-host after running into Zahr in a coffee shop and recognizing him. Her role is to bring an Arab American woman’s perspective to the show, she said.

The transition to an off-the-cuff radio program has taken a bit of time, but Huber said she’s becoming more comfortable by the day.

“It’s very different, it took me about a week to get comfortable expressing my opinion,” she said. “For 10 ½ years I had to stay very unbiased, now I basically say whatever my opinion is… I like it a lot better, I’m more free and able to express my thoughts instead of holding back.”

According to Huber, the majority of the show’s listeners are African Americans.

“We’re kind of just trying to educate them about Arab Americans because I feel like the race relations aren’t always the best among the two,” she said.

Zahr also said that fostering better understanding is a key aim of the show. Keven Adell, president and owner of 910 AM Superstation

“Well, there are a number of misconceptions that some African Americans hold about us,” he said. “And, of course, we hold misconceptions and stereotypes about our African American brothers and sisters, too. There is a lot to be worked out and discussed, and that goal underlies every discussion and debate we have on the show.”

Guests on the show have included a wide range of personalities that span the full depth of the community.

Among them have been an attorney who worked on an Islamic marriage case, a contestant in a Muslim beauty pageant and a gay Arab American author from California.

“We try to educate not just ourselves but other people on hot button issues,” Huber said. “A lot with the Arab American community but also with minorities in general.”