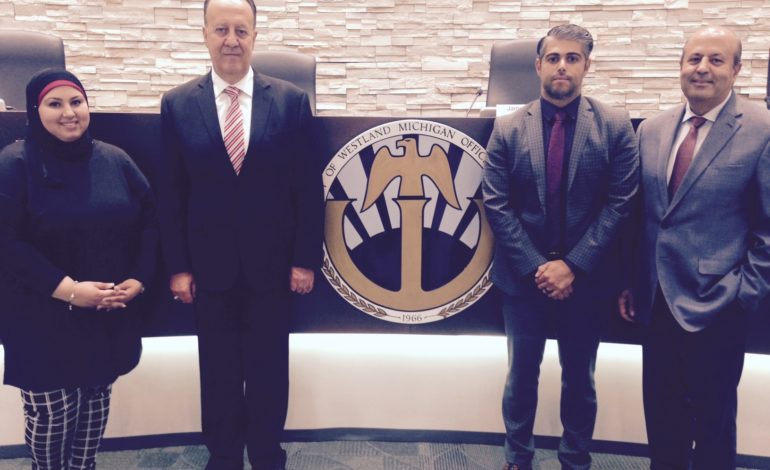 WESTLAND — The city of Westland has grown by leaps and bounds under the leadership of Mayor William R. Wild since his election in 2007, receiving honors in 2015 as one of the top 50 cities in the United States to live in by 24/7 Wall Street, a branch of USA Today.

Under Wild’s administration, the city of 82,000 people is moving forward with several projects and a team of Arab Americans in several positions of leadership is helping to lead the way.

One of them, Mohamed Ayoub, the city’s planning director, joined the team in search of more freedom to apply what he learned in college and at previous jobs.

“I have the freedom to do whatever I want in the planning department,” Ayoub said in a sit-down meeting with The Arab American News and three of his Arab American colleagues.

“The mayor gives me the flexibility to do things the way that I see is in the best interest of the city of Westland.”

Ayoub, who has a master’s in urban planning from Wayne State University, said he was attracted to Westland in large part because of positive things he heard about Mayor Wild during his campaign for Congress.

After speaking with fellow Arab Americans Ramzi El-Gharib, the city’s public service director, and Hassan Saab, the city’s deputy director of public services in the Department of Neighborhood Services, Ayoub knew the job was the right fit for him.

El-Gharib has been living in the area for nearly 30 years, starting his career as an assistant engineer in the nearby city of Wayne before moving up to director of public works under former mayor Al Haidous, who became the first Muslim mayor in the United States in 2001.

El-Gharib later retired from his post as city manager before being appointed by Mayor Wild to serve both Wayne and Westland.

“Mayor Wild gives us the freedom to get the best out of us and to serve the taxpayers of this community to the best of our abilities,” El-Gharib said during the interview at the city’s bustling new City Hall on Warren Road, which was completed in 2014 at the site of the former Circuit City store near Westland Mall.

“The best thing about the city is its staff, the administration; it’s an open, teamwork-oriented environment.”

El-Gharib said that the first thing Wild asked him to do was to create a five-year plan to improve aging infrastructure. Major projects in the areas of roads, bridges, water and the sewer system have all been undertaken in recent years.

“There are at least 10 projects that are going on,” El-Gharib said. “Westland has become a leader in this area in the past few years.”

He added that he and Saab have more than 60 years of experience in public works and that they’re excited to put it to good use in a city that continues to grow in many different ways, including in its diversity.

Ayoub said several Arab American business owners are present in Westland and the community continues to reflect the diversity of Wayne County.

“The administration represents the diversity of the region,” Saab said, when asked what brought him to the city nearly five years ago.

“I believe Westland has the right environment for people to invest, live and play.”

Liala Sobh, the deputy director of the youth assistance program in the city, agreed.

“There’s an open atmosphere here, the people are wonderful,” she said. “I work with different individuals and families within my line of work here and the people are very open.”

Aside from the people, the group said they believe Westland is an ascending city because of its amenities, infrastructure, schools, green initiatives and many other projects that are helping it grow each day.

“We like’ yes’ more than ‘no’; we’re not Dearborn,” El-Gharib said. “We find solutions for (business owners). We don’t put up roadblocks, nitpick and try to make it so hard on those people so they leave.”

Ayoub said that he has been able to maintain relationships with business owners from the Dearborn area since beginning work with Westland and that he works to “calm their nerves” and “alleviate their concerns” as they inquire about starting new projects in the city.

The approach has paid off, with Arab American business owners continuing to create new projects to move the city forward.

“I tell them that Westland will work with you through the entire process and hold your hand through the approvals,” Ayoub said.

Westland’s distinction as a top 50 city in the United States was not well publicized, but it is evident to all who enter the doors of its state-of-the-art new City Hall and speak with those in the process of leading the change.

“You can really reach your potential here,” El-Gharib said. “There is a vibe here.”