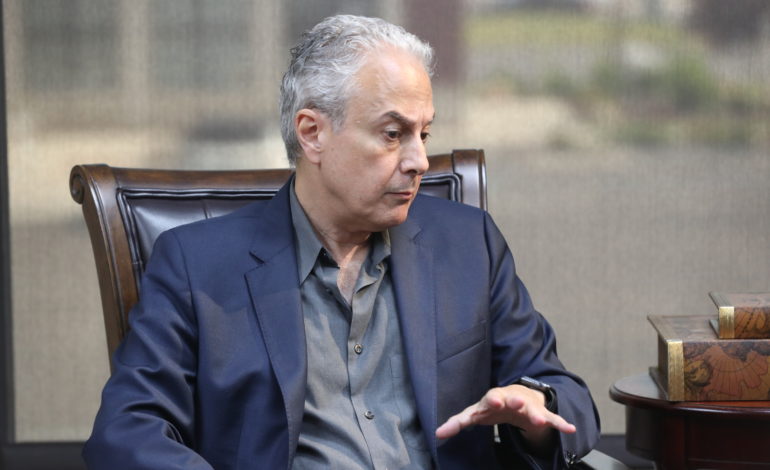 Dr. Hayg Oshagan during an interview about the 2020 Census at The Arab American News

DEARBORN —  Dr. Hayg Oshagan, director of New Michigan Media (NMM) and professor of communications at Wayne State University, recently sat down with The Arab American News Publisher Osama Siblani for a discussion about the 2020 Census and the role of ethnic and minority media outlets in ensuring a complete and accurate count.

NMM is a network of  more than 100 ethnic and minority media across Michigan. Organized eight years ago by Oshagan, it includes the “Big Five weekly” of The Arab American News, the Jewish News, the Michigan Chronicle, the Latino Press and the Korean Weekly.

`Appointed by Gov. Whitmer to sit on state level committees to ensure an accurate and complete count, Oshagan also sits on other committees in Wayne County and Detroit for the 2020 Census.

“There are two key factors tied to the Census,” he said. “One is money and the other is politics. Every year, the federal government gives out $800 billion across America.”

He added that Michigan gets about $30 billion (rounded up from $29+ billion) a year from the federal government and that money funds every social problem that you can imagine.

“So once the Census count is done, [which is the deciding factor for how much the state gets federal funding] it is the number that will be used for the next 10 years,” he said. “This funding goes to Medicaid, student loans, school lunches for kids, road construction and so on, all of it is tied to the Census. Therefore, if the number is not accurate, we will be losing a lot of money.”

Oshagan stressed his concern for a fair count in Detroit because in 2010, a self-reported Census rate was 64 percent, which he called “very low.” Dearborn had a similar rate that was in the 60th percentile.
“As such, there is a problem in the Census count in the Southeast Michigan area,” he said. “The other part of the Census under counting problem is political.”

The number of congressmen and congresswomen that Michigan will have in the House of Representatives in Washington D.C. is tied to the Census.
“In 2010, Michigan lost one congressional seat,” Oshagan said.

The U.S. House of Representatives has 435 members, but how they’re divided among the states is based on the Census count. Therefore a problematic Census count in Michigan will have an effect on the number of U.S. representatives from the state.

“My hope is that if we get a good Census count this year, Michigan will sustain what we currently have,” Oshagan said.

The reason why NMM is keen on ensuring a fair count for the 2020 Census is because, “traditionally, the people who are under-counted are minorities,” Oshagan said. “The reason is because they are usually the ones who do not respond.

The Michigan Non-profit Association (MNA) has been trying to raise funds to spread awareness on the importance of the 2020 Census. It has reached out to New Michigan Media in order to reach the minority population across Michigan through the minority and ethnic press that serve them.

NMM represents hundreds of thousands of readers, viewers and listeners in the Michigan media market. It has led newsmaker briefings, conferences and workshops, provided an ethnic news server and created an ethnic and minority media directory.

New Michigan Media is funded and supported by a grant from the Knight Foundation, the Ford Foundation and the Community Foundation for Southeast Michigan.

In cooperation with MNA, NMM will hold three conferences across the state to engage ethnic and minority media and coordinate the efforts for a complete and accurate count 2020 Census.

The first conference will be held at Wayne State University on Wednesday, July 24  from 10:30 a.m. to 2:30 p.m. Governor Whitmer will be the keynote speaker, along with Wayne County Executive Warren Evans among other local officials. The second conference will be held in Grand Rapids and third one in Gaylord on August 7 and 14 respectively.