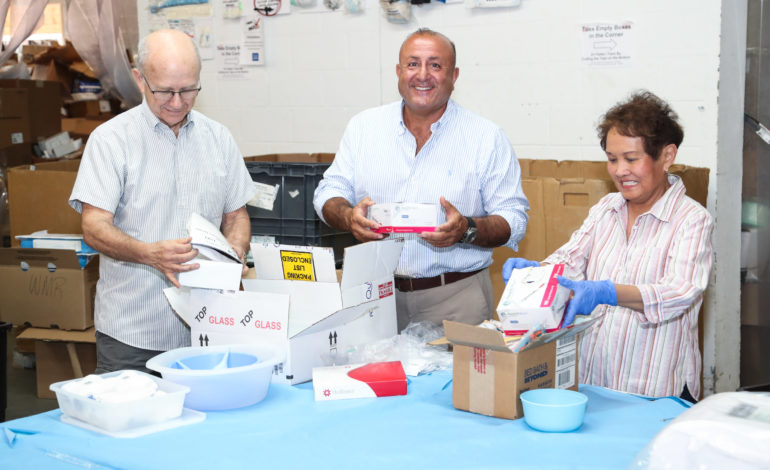 Board Chair Mike Baydoun (center) and volunteers sort medical equipment at the WMR's Southfield facility. Volunteers come from many different walks of life and often bring their own expertise and experience. Photo Credit: Imad Muhammed

SOUTHFIELD — Since 1953, World Medical Relief (WMR) has been delivering medical instruments and pharmacy services on a humanitarian basis to much needed corners of the world. The organization invited The Arab American News to its offices and distribution facility in Southfield, to get a glimpse of some extraordinary humanitarian initiatives and a sit down with Board of Directors Chair Mike M. Baydoun, a Dearbornite and Lebanese American.

The organization has operations across the globe, supplying medical relief to crisis-ridden areas that have great and urgent medical needs, often complicated by border politics. A look back into its history shows its very humble and unique beginnings in the city of Detroit.

Founder Irene M. Auberlin, a Detroit housewife, got the inspiration to start a medical charity in 1953 after seeing a news report that featured a blue eyed, biracial, Korean child in the care of a Korean orphanage at the height of the Korean War.

Auberlin took action to aid this one orphan and collected diapers, cribs, clothing, formula and anything else that could be given to the orphanage. Her own home became the office, warehouse and shipping point for the tons of donations that poured in from others inspired by her conviction and practice.

Self-described as a “world-class beggar”, Auberlin expanded her operations as word of her work with the orphanage spread across Michigan. She asked doctors, hospital administrators and pharmaceutical suppliers to donate faulty or unused equipment, which was then repaired and shipped out.

By 1956, her operation acquired its now internationally recognized name and moved to a four-story warehouse in Detroit. In 1966 it created a local pharmacy program and was granted a state pharmacy license. The organization still runs an affordable prescription program for low income residents of Michigan.

WMR moved its operations to a 65,000 square foot facility in an industrial park in Southfield in August 2015. The facility includes an all-volunteer run, state-of-the-art sorting and distribution facility, a full pharmacy, medical equipment servicing and repair department and a reconditioning and recycling lab.

Due to the logistics of packing and shipping often large, unwieldy medical equipment, WMR relies on 40-foot sea-land containers and has to navigate complex geopolitics of borders and state boundaries, something that is intensified during war, civil strife and political uprisings, and famine and natural disasters.

Miraculously, this has not deterred the organization from its goals and just last year it scaled its operations to record numbers. Seventy of these large containers, holding almost 1 million tons of supplies and equipment, were shipped in 2018. Sorted and packed by almost 3,000 volunteers, they were sent to Lebanon, Kenya, Jordan, Yemen, Senegal, Nigeria, Iraq, Palestine, Sudan, Zimbabwe, Philippines, Tanzania and Haiti.

Through its initiative in Yemen, WMR has tried to curb the serious health crisis in the country devastated by civil war. With only half of Yemen’s 3,500 health facilities fully functioning, at least 16 million people are lacking basic healthcare.

Though the organization was very successful in bringing aid to the region last year, this year its 24 allocated containers were blocked due to aid sanctions. It hopes to resolve this issue through negotiations in the near future.

WMR has another connection to the Middle East, however. Baydoun is a longtime Dearborn resident, with roots both in the Arab community in Michigan and the Arab diaspora in West Africa.

He became involved with the organization about 25 years ago, almost by accident.

“I was appointed honorary consul general for Liberia at a young age,” he said. “I had studied diplomacy and international relations and had gotten some advance degrees in the area. The country’s foreign minister at the time, an Arab Liberian himself, was a good friend of mine and asked me to help during the civil war.”

Healthcare and education were hit hard during the war. Baydoun went to the WMR offices in Detroit seek help for the country that had its own problems accessing aid at the border. WMR stepped up to the challenge. He has been with the organization ever since.

“My experience is in conflict zones,” Baydoun said. “When order breaks down and governments can no longer support the health sector, medical needs become critical. This is the situation we see both in Africa and the Middle East.

“We have provided much need aid to Lebanon as well,” he added. “Though we do have pharmacy students and some volunteers from the Arab community in Metro Detroit, we could definitely use more assistance.”

Volunteers may be the back-bone of the organization, but it relies heavily on individual and corporate donations. This is especially true for overseas missions. It shipped out more than $30 million in equipment last year alone.

Nidhal Garmo is vice chair of WMR’s board of directors and a Chaldean American. She has been instrumental in bringing relief to Iraq, through persistence, bravery and creative strategies.

“Garmo is on the front lines and will often go with the containers,” Baydoun said. “She has done amazing work in Kurdistan. She makes sure the containers’ contents go where they are needed and do not get hijacked on the way.”

Baydoun is proud of this Lebanese and Chaldean American partnership.

He urges the Arab American community in Metro Detroit to get involved in charity organizations.  Although many Arab American students give their time, with many medical and pharmacy students from the area’s universities gaining valuable experience, Baydoun invites Arab Americans of all ages and background to donate or help at the facility.

“In Islam, we are taught that if you save one life you save humanity,” he said. “Our organization saves lives and makes an important impact. I’m a small part of this effort, volunteers and donors make a real difference.”

More information can be found at www.worldmedicalrelief.org.