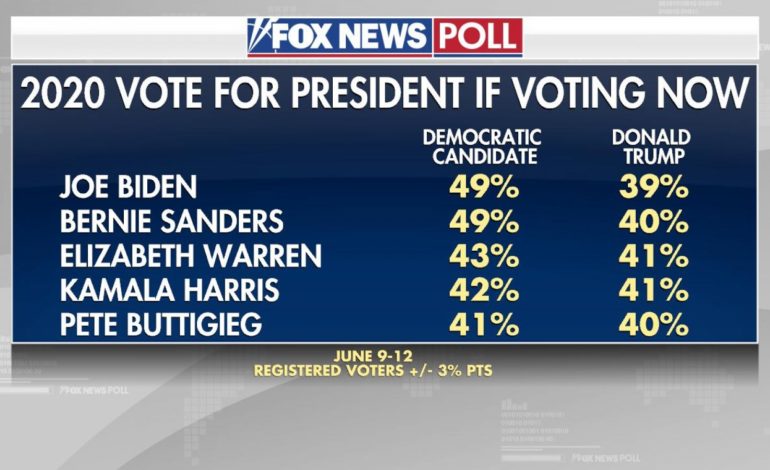 Trump complaining about polls that show him losing the national popular vote to various Democratic presidential aspirants, in some cases by double digits.

“Here we go with the Fake Polls,” President Trump tweeted on July 15. “Just like what happened with the election against Crooked Hillary Clinton.”

He’s complaining about several polls that show him losing the national popular vote to various Democratic presidential aspirants, in some cases by double digits.

He has a point. In 2016, most polls showed Hillary Clinton winning handily and most Americans seem surprised when Trump emerged victorious.

On the other hand, Trump’s future isn’t quite as indisputably bright as he’d have you believe.

The first problem is the false perception that there’s a “national popular vote” or, concomitantly, “winning nationally.” There isn’t.

First, the “national popular vote”: Hillary Clinton received more votes nationwide than Trump did in 2016, but lost the election because all of each state’s electoral votes go to the winner of the popular vote in that state (except Nebraska and Maine, which apportion their electoral votes by congressional district). A narrow win in a state gets you exactly as many electoral votes as a landslide and vice versa. Trump complaining about polls that show him losing the national popular vote to various Democratic presidential aspirants, in some cases by double digits.

Clinton won California, beating Trump by more than 4 million votes. Clinton received nearly 3 million more votes than Trump nationwide. But Trump racked up 304 electoral votes to her 227 with small-margin wins in Florida, Pennsylvania, Michigan and Wisconsin. Nationally, the election turned on fewer than 80,000 individual votes in those last three states.

That’s how it works. A “national” poll can’t tell us who will win a presidential election because it doesn’t capture the relevant data.

Second, the problem with polling as such: Pollsters are having a harder time identifying and reaching representative samples of likely voters who willingly share their preferences.

In 2016, I predicted (six months in advance) that Trump would win Florida, Ohio, Pennsylvania and Michigan. Friends told me I was crazy to think he’d win any of those states. He won them all — and with them, the election.

My formula for predicting the outcome those states was simple: I believed that any state in which Clinton didn’t enjoy at least a 5 percent polling advantage would go for Trump, because Trump was activating a demographic — rural Republicans — that was going to turn out at much higher than usual levels but that pollsters weren’t reaching.

What’s Trump’s 2020 problem? A few tens of thousands of Democratic votes in Pennsylvania, Michigan, Wisconsin and possibly Florida would enough to reverse the Electoral College outcome.

My prediction: Trump won’t win any states in 2020 that he didn’t win in 2016. The question is how many states (and thus how many electoral votes) the Democratic nominee can wrench from his grasp. Two would be enough, if one of them is Florida. Without Florida, it would take three.

It’s closer than it looks, folks.