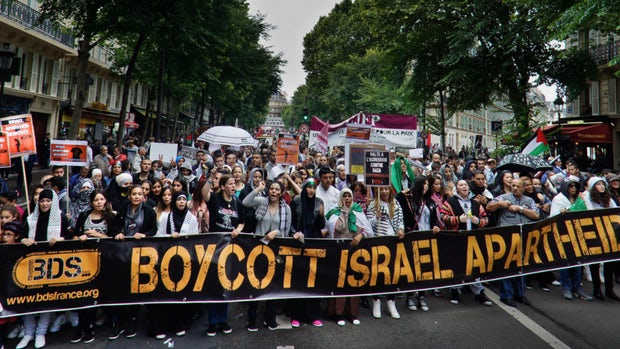 WASHINGTON, D.C. — The House passed legislation opposing the global boycott movement against Israel on Tuesday, by a wide margin of 398-17.

Of those who opposed it, 16 were Democrats, including freshmen Representatives Ilhan Omar (D-MN) and Rashida Tlaib (D-Detroit), who are both vocal supporters of the BDS movement.

The bill was brought to the floor under a fast-track process requiring a two-thirds majority and limiting debate to 40 minutes.

Despite overwhelming opposition, Tlaib spoke out strongly against the bill, recalling her family’s Palestinian roots.

She said she “can’t stand by and watch this attack on our freedom of speech and the right to boycott the racist policies of the government of the state of Israel.”

Tlaib also called the resolution an attack on free speech.

“Our right to free speech is being threatened with this resolution. It sets a dangerous precedent because it attempts to delegitimize a certain people’s political speech and to send a message that our government can and will take action against speech it doesn’t like,” Tlaib said in her floor speech according to a report from The Hill.

Mark Pocan, a Democrat from Wisconsin, said before the vote that he felt the resolution opposing BDS went too far, even though he’s not a supporter of the movement.

“It goes too far, in my opinion, in telling people what they can or should think or say about the situation in Israel,” Pocan said. “I also think it is OK to be critical of the Netanyahu administration or government and their policies.”