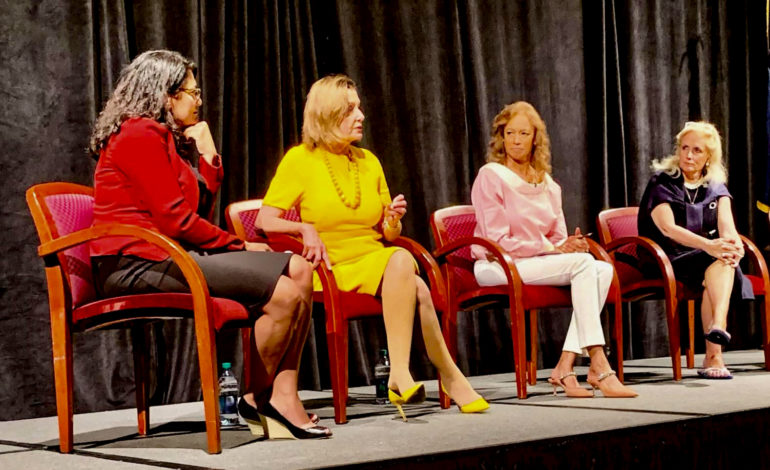 DEARBORN — Speaker of the House Nancy Pelosi visited both Dearborn and Detroit this past week, addressing  civic, Arab American and NAACP leaders on key issues during what has become a tense time for minorities everywhere.

“This has been a challenging time for our country,” Pelosi (D-CA) said to gathered press at the NAACP’s 110th annual convention Monday.

“It is different from any time we have experienced, where we have an abandonment of what our founders cautioned us to do.

“They said ‘e pluribus unum; from many, one,'” she said. “They didn’t know how many we would be, or how different we would be from each other, but they said we should be one.”

She added that the American people have “a judgment to what he is.”

Also at the NAACP event, Pelosi said more needs to be done to protect voters, and to address criminal justice inequality, while praising Detroiters who helped elect a Democratic majority in the U.S. House of Representatives.

She spoke following Tlaib, who received a rousing applause when calling once again for Trump to be impeached.

The event, which included a fireside chat with former WDIV-4 news anchor Carmen Harlan, was attended by hundreds of people, many of whom lined up for pictures afterward.

She spoke about Dearborn’s place as the capital of Arab America and called for inclusion and unity.

“Her message was very unifying,” said Wayne County Commissioner Sam Baydoun, who was in attendance. “She’s the third most powerful woman in America, so I think it was very, very important for her to visit Dearborn.

“I think it was important for Nancy Pelosi to say that we are one nation one under God, indivisible, with liberty and justice for all; we are one country, a nation of immigrants.”