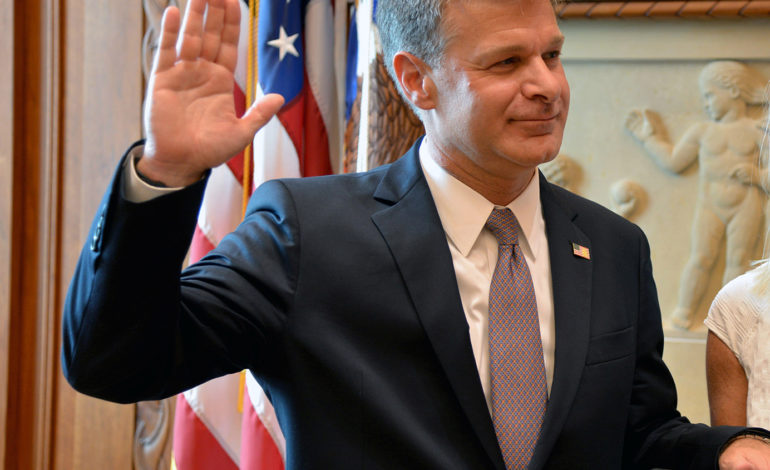 WASHINGTON, D.C. – FBI Director Christopher Wray said Tuesday that the agency has made about 100 domestic terrorism-related arrests since October, and the majority were tied to White supremacy.

”I will say that a majority of the domestic terrorism cases that we’ve investigated are motivated by some version of what you might call White supremacist violence, but it does include other things as well,” Wray said at a Senate Judiciary Committee hearing, referring to cases in fiscal 2019, which began Oct. 1.

“The bureau is focused on investigating the violence, not the ideology motivating the attacks,” Wray said. “The FBI is aggressively investigating domestic terrorism and hate crimes.”

Wray distinguished between what he termed homegrown violent extremism, wording he said the FBI uses to refer to people in the United States who are inspired by global jihadists, and domestic extremism, which Wray described as broader to include racially motivated extremists, anarchists and others.

The number of domestic terrorism arrests are on par with the amount international terrorism cases, according to Wray.

“In terms of number of arrests, we have through the third quarter of this fiscal year had about give or take 100 arrests on the international terrorism side, which includes the homegrown violent extremism,” Wray told Sen. Dick Durbin (D-IL) at the hearing. “We’ve also had just about the same number — again, don’t quote me to the exact digit — on the domestic terrorism side.

“Our focus is on the violence,” Wray added. “We at the FBI don’t investigate the ideology, no matter how repugnant. We investigate violence. And any extremist ideology, when it turns to violence, we’re all over it.”

Wray has previously said that White supremacy poses a significant and “pervasive” threat to the United States.